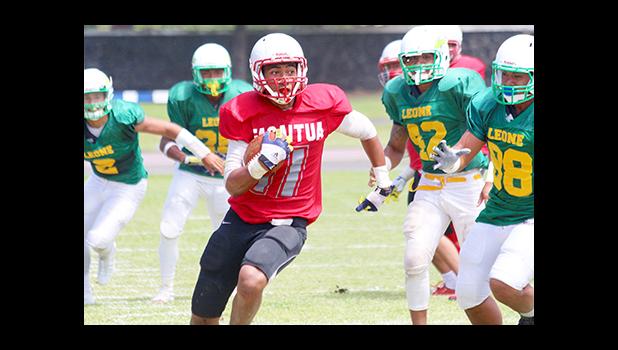 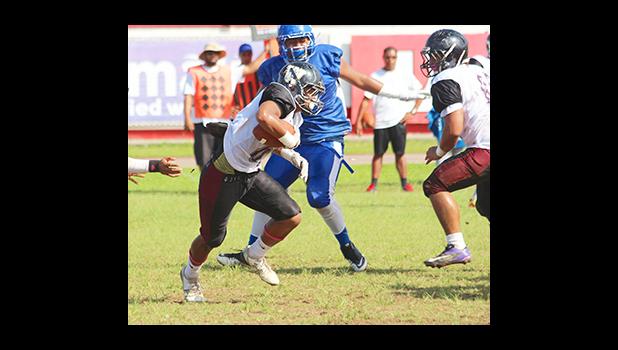 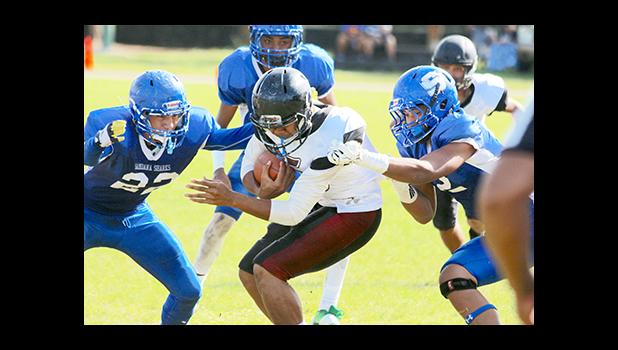 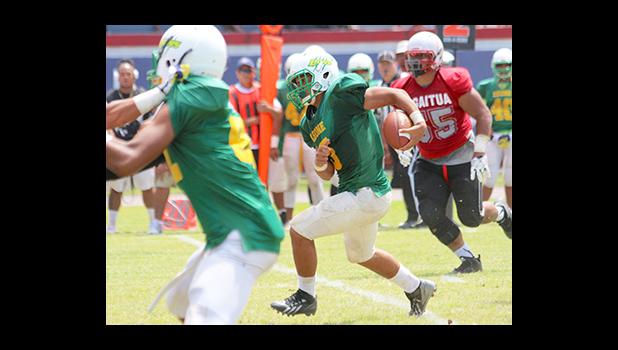 This past weekend hosted the 2016- 17 American Samoa High School Athletic Association (ASHSAA) Varsity Football Playoffs held at the Veterans Memorial Stadium. The games started last Friday morning on Veterans Day holiday with the battle between the Vikings and the Lions, where the reigning divisional champs edged the Lions in their 20 - 18 victory to advance onto this year’s championship title game.

Then, Saturday morning’s main event between the Tafuna Warriors and the Samoana Sharks bore witness to the Warriors claiming victory with a 14 - 6. As a result, Head Coach Kolose Ili and the Warrior Nation will look ahead to face Head Coach Sua’ese Pooch Ta’ase and his Vikings in this year’s title game scheduled for this upcoming Saturday.

In the first play-off match between Leone and Faga’itua – it opened up with a Maurice Lotovale carry that put the Vikings ahead with a comfortable six-point lead, 10:32 into the opening quarter, after opting to receive the opening kick off from Leone. Mathew Lagai of Leone denied their two-point conversion after bringing down Vito Kitiona behind the goal line.

Midway into the first half of the game, 5:46 remaining in the second quarter and Leone answers back with a gap opening by the Lions offensive line that opened up some running room for Luteru Ah Loe – a third down conversion and Ah Loe bolted into the end zone with the help of his offense to scoring Leone’s first touchdown of the game.

Then, late in the second quarter, Raemos Fano and the Vikings shocked the Lions into halftime, after sending TI Farani straight up the middle on a second down conversion inside Lion territory for another Faga’itua touchdown. Leone’s Mathew Lagai again denied their two-point conversion to John Muliaga.

The second half wasn’t in favor of Leone as well, as it opened up with a crucial turnover by the Lions, when Vegas Pearson of Leone lost the football into the possession of the Vikings – Lions first down on their own 1-yard line, and Pearson was rocked by Faga’itua’s Blessman Ta’ala, causing a fumble that was recovered by the Vikings inside Leone’s red-zone.

Faga’itua utilized the opportunity and gained six more points – a Vikings third down that saw Farani muscling his way through the middle to score his second touchdown of the game.

Midway through the second half of action, and the Lions quarterback Loverenko Uiese brings the Lions back to life with a quarterback sneak that closed the gap in Faga’itua’s 2-point lead into the closing minutes of the match. With the Vikings being the master of the clock game, Leone came up short, as their long season was ended by the reigning divisional championship with a 20 - 18 victory.

The Warriors, who haven’t been a championship contender since two years ago, are finally going back to the big dance to face the reigning champions, Faga’itua Vikings. The great news for the Warrior nation came after Head Coach Kolose Ili led his boys to victory over the Samoana Sharks with a 14 - 8 win.

While the Tafuna’s offensive unit was exploring different ways to catch the Sharks off guard, Samoana’s offense led by Chris Tautu were strategizing on ways to get pass Penei Pavihi and Tafuna’s defensive unit.

Late in the opening quarter of the game, and the Sharks finally unlocks the mystery of getting passed the goal lines, but the spark came from their defense, when Cornelius Aiava hammered Tafuna’s Papali’i, causing a fumble inside Warriors territory that turned the ball over to Samoana.

An opportunity that looked positive for the Sharks turned sour when their offensive possession pinned deep in their own territory. 4:20 in the second quarter, and Sharks’ second down possession had Tafuna’s vicious defense swarming Samoana’s backfield – an attack led by Alex Ieremia and Baldwin Wilson saw Tautu being devoured in the end zone for the safety that added more points onto the Warriors side of the scoreboard.

Late in the second quarter, Tafuna decided to give it a final push going into halftime – 3:22 remaining in the half, Tafuna’s third down at midfield, and Sufia looked far to bomb a long pass out to Pulenu’u Fono – who secured his second touchdown catch of the game, moving the Warriors further ahead with a 14 - 0 lead into halftime.

The second half of play was a drag as the Sharks continued to explore more opportunities in their air game, leading to the clock being stopped often – unfortunately for Samoana, Warriors Defensive Coordinator Kevin Magalei emphasized to his defense how important this match was for them.

It wasn’t until the final quarter of the game when Samoana finally got pass Tafuna’s defense – as they continued to switch quarterbacks throughout the game. Head Coach Pati Pati finally came to terms in the second half and brought back Atipopo Tino to play behind center after a change up from Tautu, to Anthony Feala, to Tino.

Sharks’ second down inside Warrior territory and Tino connected with Ueligitone Tualaulelei for their first touchdown of the game. Pavihi denied their two-point conversion after he immediately apprehended Samoana’s Faleali’i in the backfield.