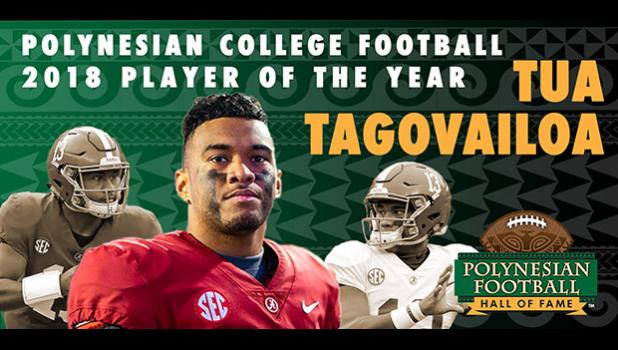 HONOLULU, HAWAII — University of Alabama quarterback Tua Tagovailoa has been selected as the 2018 recipient of the Polynesian College Football Player of the Year Award.

The Award is presented annually to the most outstanding Polynesian college football player that epitomizes great ability and integrity.

Tagovailoa helped lead Alabama to an undefeated 13-0 record, the SEC championship, and a berth in the college football playoff. He produced one of the greatest seasons by a quarterback in Alabama history. He finished the regular season completing 67.7% of his passes for 3,353 yards with 37 touchdowns and only four interceptions. His explosiveness powered Alabama to score a touchdown on its opening drive in 10 of their 13 games, and those possessions averaged 1:55 in length.

The dynamic dual-threat quarterback won the Walter Camp Player of the Year Award, the Maxwell Award, and was named runner-up for the Heisman Trophy. He was born in Ewa Beach, Hawai`i to Galu and Diane Tagovailoa and is of Samoan descent.