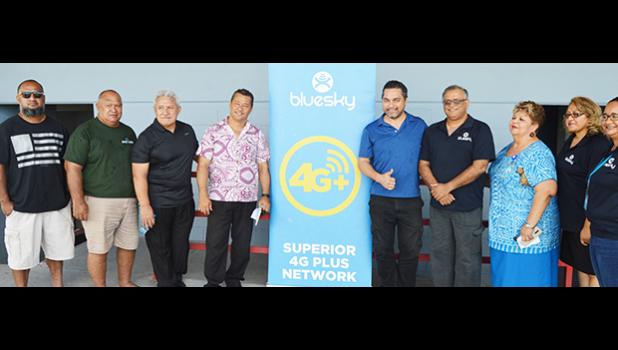 Pago Pago, AMERICAN SAMOA — At a press conference last Friday, the American Samoa National Olympic Committee (ASNOC) announced its partnership with Bluesky Communications- American Samoa, Asco Motors, and GHC Reid Co. Ltd, to not only support the development of sports in the territory, but to assist Team American Samoa in their preparations for the upcoming XVI Pacific Games set to be held in Samoa, later this year in July.

Held at the ASNOC main office at Veterans Stadium in Tafuna, it was attended by representatives from the three local companies and ASNOC President Etisone Ed Imo and ASNOC Secretary General Ethan Lake.

Speaking on behalf of ASCO Motors and Toyota, which is the world major sponsor for the International Olympic Committee (IOC), Vaisigano thanked ASNOC for allowing their company to be one of the major sponsors for Team American Samoa. It’s help are three vehicles to help ASNOC and its athletes with transportation.

“We’re so proud not only to be the world major sponsor for sports... but also to be one of the three [local] major sponsors for ASNOC this year."

According to Vaisigano, the vehicles will be used by ASNOC until the end of 2020.

Speaking on behalf of GHC Reid, Kupu said their company’s goal is to continue their support in developing sports in American Samoa.

“We hope that the goods we are going to provide such as Vaimalu and Powerade will help our athletes."

He also pointed out that more than $100,000 has been donated by the Leala Foundation since 2014, to support the development of sports in American Samoa.

For Bluesky Communications- American Samoa, Sele said they will provide free internet service and cable service for the ASNOC office, so they can start their research on all the requirements needed for the Games. Bluesky will also provide travel uniforms and bags for about 350 members of the delegation for the upcoming Pacific Games. For the sports officials, the company is providing 30 mobile phones to make communication between sports officials and athletes easier.

Lake said ASNOC is excited with the support from the business community. “We are grateful for our business partners that have contributed through a combination of in-kind products and services, and monetary donations to ASNOC. I am humbled by the response and support from our new community partners."

Imo noted he deeply appreciates the willingness with which each business has and continues to sponsor their efforts to help local young athletes develop and grow.

“We sincerely hope that this partnership will be maintained and that you will continue to support us in our future endeavors,” he said.