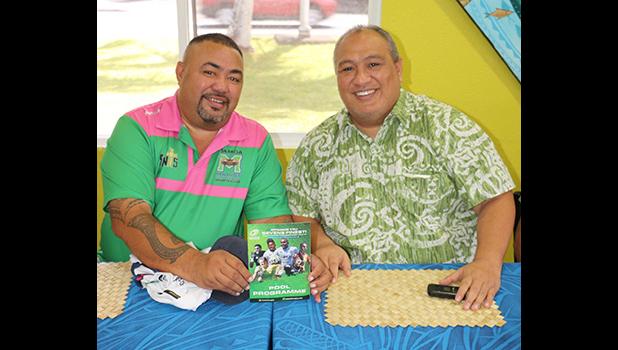 Present at the luncheon was Taupau Tauileave Toluono of Pentagon Samoa and it’s family of companies, which was the major sponsor for the team, providing all the uniforms, return accommodations and coverage of the Oceania Sevens through Samoa News and its social sites.

Taupau spoke about his involvement with rugby in American Samoa and days in the past where he would pass by and see national teams prepping for off-island competitions by holding car washes and fundraisers to purchase uniforms, pay for competition registration fees and accommodations, and it was there and then that he made a vow to himself that if he was ever able to contribute to rugby and its players, he would.

He thanked the ASRU for allowing him to become a sponsor. He also thanked Ms. Leilua Stevenson, Sally Faumuina and the DDW Beach Cafe for the Dinner sponsorships both locally and in Samoa and for their help during the training camp. He also thanked the Coach and Manager for all their hard work in putting together and caring for the team during the training camp and while the team was in Fiji for the Oceania Sevens.

Taupau further praised and thanked the local players for never giving up on playing rugby and for always answering the call to represent American Samoa — leaving families, friends and sometimes jobs behind in order to field a team.

To the players that traveled from afar to represent American Samoa he applauded their pride and love for family and American Samoa. He pointed out, “The ASRU and our local players have all learned something new from you just by your being here.

“New techniques, new ideas and new friendships are what you are leaving behind for the Talavalu and the ASRU,” he said. “Thank you for accepting the invitation to play for your country.”

Taupau also announced during the luncheon that Pentagon Samoa and its family of companies will also be the sponsor for a team from American Samoa to play at the prestigious Marist International Sevens in Apia, Samoa in February 2020. This announcement was met with a loud cheer from both the ASRU and the Talavalu players.

ASRU National Rugby Team Talavalu gifted Pa'u Roy Ausage & Mrs. Gloria Samana Ausage, owners of the Transit Motel in Mulifanua with a Talavalu Team singlet as an appreciation gift for playing host to the team on their way back from the 2019 Oceania Sevens Championships held in Suva, Fiji and for their never-ending support. Presenting the small token of appreciation on behalf of the ASRU and the team is Talavalu Team Manager Annie Coffin and Talavalu player Fa'afetai Te'o. [Photo:TCA]

Special recognition and appreciation was also conveyed to the players that travelled from the US to join the squad when contacted for help in fielding the team, as one of the requirements to qualify for the Olympics is that all countries must field athletes who hold passports issued by the country for which they are playing.

Iiga also shared that funding has been a long standing problem with the ASRU and the Union is blessed this year to have the support of Pentagon Samoa, its family of companies, Taupau Toluono, Ms. Leilua Stevenson and DDW along with the support of the American Samoa Government for $5,000, and also the parents, families and friends of the players who contributed $5,000 plus during the farewell dinner and made the Talavalu journey to the Oceania Sevens possible.

An emotional Leilua thanked the team for representing American Samoa well. “You are an awesome group of young men who represented Am.Samoa with your whole heart and passion for the game. It was a  once in a lifetime experience with you in Fiji.

Talavalu Vice Captain Marvin Joe Iosefa presents Ms. Leilua Stevenson with a jersey signed by team Talavalu as a token of appreciation for her love and support during the Talavalu’s journey to the 2019 Ocania Sevens Championship in Suva, Fiji. Ms. Stevenson got even more emotional when she was told that the jersey #8 was worn by her son Paul Alo Fuimaono during the games. The presentation was made at the ASRU luncheon Monday afternoon at the DDW Beach Cafe. [Photo:TCA]

Marvin Joe Iosefa spoke on behalf of the off-island based players, conveying their appreciation at being invited to represent American Samoa at a international competition.

Talavalu Vice Captain Marvin Joe Iosefa spoke on behalf of the Talavalu players thanking the ASRU and sponsors for the love and support during the 2019 Oceania Sevens Championships held in Suva, Fiji, Nov.7- 9, 2019.  [Photo:TCA]

“This is where I started my career in rugby” he said. “It’s an honor for me to be able to come back and give back.”

In a earlier conversation in Fiji, he spoke about seeing the hardship the union is going through with lack of tournaments and funding, the tough time coaches and players have securing a field for training, the lack of fundamental ball handling and passing skills among the young local players and the need to have a more structured training and development schedule for the National Team.

Iosefa thanked all his team players for the love and support they showed each other and the bond they were able to develop on and off the field.

During a team assessment held for the team before the actual matches started in Fiji, the major issue that was brought up by the players was the fact that they were not able to train for more than two weeks. The lack of a proper diet for athletes, not having a set training regimen, and the confusion between the roles of the coach and team manager were issues voiced by all the players. That said, each and everyone of the players also voiced their appreciation to both the coach and team manager for using personal funds as well as the team manager’s private home to host the training camp.

ASRU and team Talavalu presented Taupau and Stevenson with jerseys signed by all the players and coach and management team as tokens of appreciation by for the love and support throughout the Talavalu’s preparations for the Sevens, as well as during the championships.

Talavalu Team Captain Pentateuch So’oso’o Vaki presented Taupau Tauileave Toluono with a jersey signed by team Talavalu as a token of appreciation for his love and support during the Talavalu’s journey to the 2019 Oceania Sevens Championship in Suva, Fiji. [Photo:TCA]