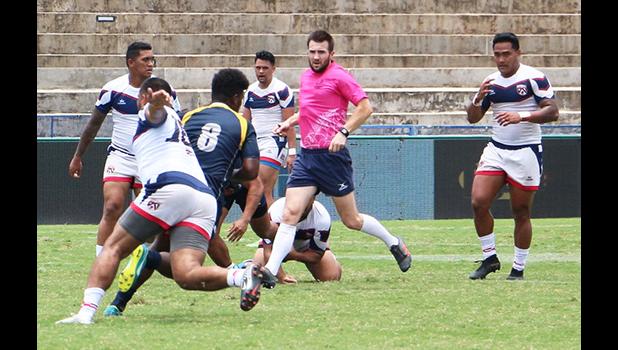 Coverage of the Talavalu at the Sevens is brought to you by Taupau Tauileave Toluono of Pentagon Samoa and its family of companies.

Talavalu had a lot of possessions, but ball retention was lacking due to errors. Simple mistakes riddled the match, costing them multiple tries. The only try was scored by #2 Tony Esau late in the match.

Talavalu’s next match will be at 2:02 Saturday against Cook Islands for the shield finals.

#16 Prop Eroni Foifua fends off a defender while moving the ball forward in order to set up the only try by Talavalu during the Bowl semifinals against Solomon Islands.[photo:Terry Custodio Auva’a]

#2 Tony Esau with the only try in the match against Solomon Islands, which ended with a score of Solomon Islands 35 - Talavalu 5. [photo:Terry Custodio Auva’a]