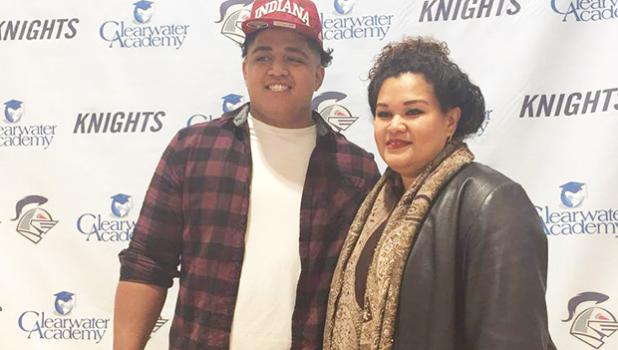 Clearwater, FLORIDA  — For the first time in the short history of Clearwater Academy football, the school had three players sign with Division I-A programs. And all three took circuitous routes to college.

DL/OL Sio Nofoagatoto'a was born in American Samoa, lived in Australia and enrolled at Clearwater Academy two years ago. He signed with Indiana on Wednesday in the school's gym.

"There are a lot of Samoans on the West Coast and I think everybody thought that I would flow that way," said Nofoagatoto'a, whose mother, Senetima, flew in from San Diego to see him sign. "But the biggest thing for me was establishing myself somewhere where it's not popular. I loved the family vibe at Bloomington. They've had a lot of success with Florida boys so I thought I could fit in there."

Indiana currently has 10 players on the roster from the Tampa Bay area.

DL Kervens (D.K.) Bonhomme was born in Haiti, grew up in Canada and came to Clearwater for his senior year. He also signed with Indiana. Bonhomme led the 11-0 Knights with 100 tackles and eight sacks.

"It's been a long journey," Bonhomme said. "Two years ago if you asked me where I would be right now, I wouldn't have had an answer. But here I am, thank God."

Both Bonhomme and Nofoagatoto'a FaceTimed with Hoosiers coach Tom Allen after they signed.