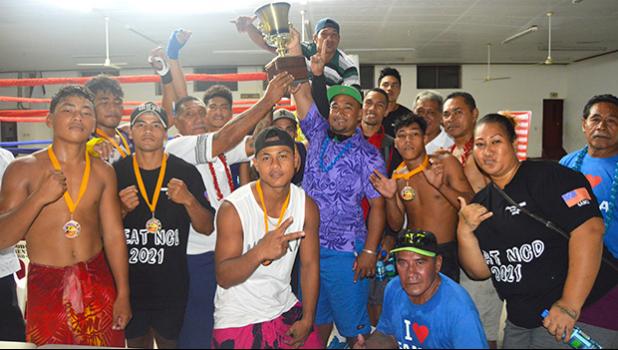 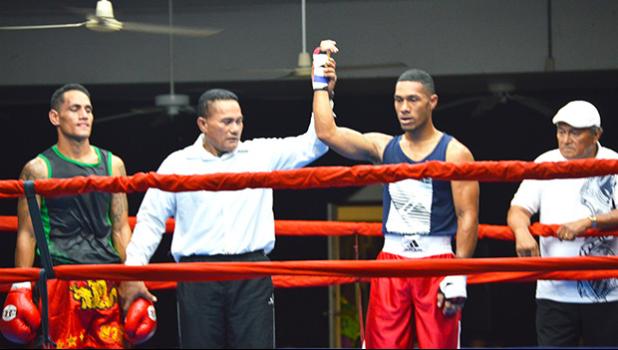 “The first thing I say to them is to maintain their discipline everyday. Discipline is the word that I am very strong on and I use and I lead by example in discipline. I tell them to be punctual all the time.”

The tournament, which was held at the old Bowling Alley in Tafuna was hosted by the American Samoa Amateur Boxing Council (ASABC).

The American Samoa Flag Day 2018 Championship Boxing for the Governor’s Cup between the two Samoas ended in a draw with both sides getting 3 wins each.

President of the ASABC Toleafoa Henry Tavake made the decision that the Samoa boxing team would take the Governor’s Cup home. American Samoa won the cup twice for 2016 and 2017.

The event drew more than 200 spectators, who came to watch some of the best boxers in both Samoas compete.

One of the best performances of the night was by American Samoa’s rising star, George Tanoa Jr. who won his fight by knocking down his opponent in the second round of their middleweight gold medal match. This was his first win by way of knockout in his boxing career.

After an opening prayer to start the program, a representative from the American Samoa boxing team offered opening remarks with a big fa’amalo to the crowd for showing their support, especially to the sponsors of the event. He also welcomed the team from Samoa and wished them good luck.

“This will be a huge step forward for our young fighters who are now battling for the win tonight,” he said. “Not only will they get the chance to show they have the talent, but it will also prepare them for the next challenge in life.”

American Samoa’s first gold medal of the night was from Keach Tanoa, who defeated Alaga Fitu of Samoa in a unanimous decision. Tanoa won by landing powerful body shots throughout two of the rounds, with the referee, stopping the fight twice to give Fitu a ten-count. There was no third round.

American Samoa’s second gold medal for the night was from George Tanoa Jr. when he defeated Tasi Tonelafo of Samoa in a second round knockout, which was also the only knockout of the night.

Tanoa Jr kept his cool during the match with both fighters showing their power and skill in the first round of the match. Tonelafo showed his experience and controlled the fight, but Tanoa Jr. responded with power and speed.

It was in the last minute of the first round when Tanoa Jr caught Tonelafo with a powerful right hand punch connected with a upper-cut which caused the referee Pio Folesi from Samoa to give Tonelafo his first count of the fight.

Tanoa Jr. looked to blitz Tonelafo from the opening bell of the 2nd round and he finished the match when he connected powerful body shots with a clean right hand to his opponent’s jaw, which sent Tonelafo crashing to the canvas and unable to stand up.

American Samoa’s third gold medal of the night was from Alofa Mataafa when he defeated the mighty Fa’amanu Aokuso of Samoa in a split decision. Aokuso won a bronze medal for Samoa during the 2017 Mini Games in Vanuatu.

Aokuso was unstoppable in the first round, throwing power punches, but Mataafa controlled his base, connecting his jabs and landed good body shots, which caused Fa’amanu to retreat a little bit.

Both fighters were impressive in the last two rounds, throwing some good combinations at each other, but in the end, Mataafa won the match in a split decision.

Talaimalo was impressive in his form throughout the whole match against Tupito of Samoa, throwing some good combinations to the body and face of his opponent followed by a deadly upper-cut, causing Tupito to stumble before the bell rang in the second round of the bout. But it was the Judges’ decision to give Tupito the win by a split decision.

Samoa boxing team’s coach was excited when he spoke to Samoa News about the team’s accomplishments.

“They exceeded all my expectations and did well for a small team,” Falefitu Ailoa said. “There were all sorts of emotions going through my head as the team headed into the final bouts. They dug deep and we are really happy, pleased to get the opportunity to get our hands on the trophy.”

Ioane Ioane who won the first gold medal for Samoa was in tears when he spoke to Samoa News about his win.

“It’s my first gold medal in my boxing career and I can’t wait to go back home and show it to my Mother, who helps me a lot throughout my training. I want to earn more gold medals in the future especially in the international level for my country and family. I’m young, active and hungry and I want to be a better fighter in the future,” Ioane told Samoa News.