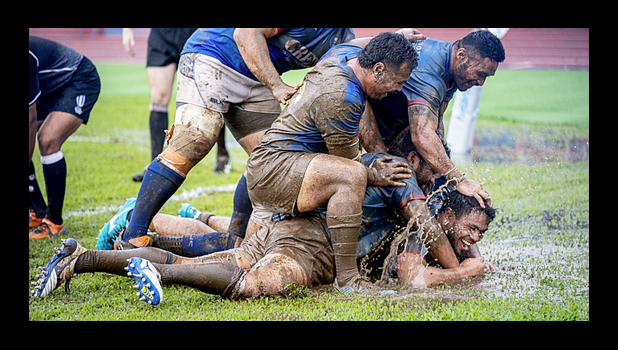 Apia, SAMOA — Perhaps the biggest talking point out of the match between Samoa and Tonga was the horrific conditions that the two teams did battle in.

The wind, rain and ripped up terrain meant that points were always going to be at a premium and it was the home team that ultimately made the most of their chances. Samoa triumphed 25-17 in the end, but it was Tonga who led for lengthy periods of the game.

Despite being played in Samoa, the Tongans went into the game as slight favorites. Prior to kick-off, Tonga were ranked 13th in the world to Samoa’s 16th and the last two clashes between the sides had also fallen Tonga’s way, so there was plenty of motivation for the home side.

Nasi Manu was a late withdrawal from the match with hooker Elvis Taione taking over as captain. This change didn’t appear to affect Tonga’s belief, however, with Cooper Vuna scoring the first try from an excellent kick chase.

Racing 92 prop Ben Tameifuna crashed over just before half-time to give Tonga a 10-3 advantage – even though they had spent almost no time inside the Samoan 22.

Samoa struck back shortly after half-time when Alapati Leuia dotted down thanks to a linebreak from No8 Afaesetiti Amosa. That try, coupled with Ulupano Seuteni’s conversion, levelled the score at 10-all.

A Seuteni penalty only minutes later put the Samoans in the lead for the first time in the match, 50 minutes in.