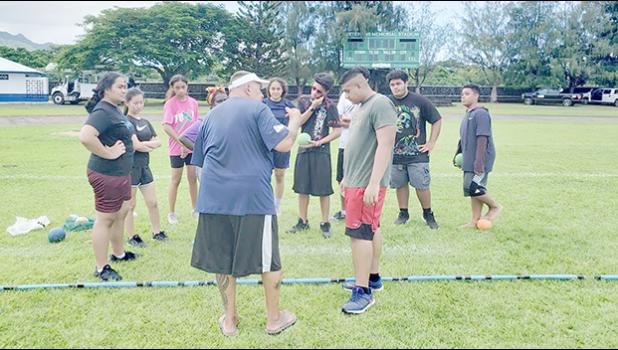 Pago Pago, AMERICAN SAMOA — Handball is once again being exposed to our local students as The American Samoa Handball Association has partnered with Pacific Horizons School to learn the Olympic game of Handball while they utilize the sport during PE class to gain some experience in a competitive situation.

Students from grades 8 through 12 were bused from the school to Veterans Stadium for an hour and a half physical education class, organized by Pacific Horizons PE Teacher June Maeva.

The students are benefiting from the experience and learning the game of handball from two of American Samoans most highly decorated coaches.  National head coach and president of The American Samoa Handball Assn. (ASHA) CJ Sagapolutele Floor and long time assistant coach Joey Sagapolu (ASHA VP) have won Continental Gold, two Continental Silvers, one regional Gold and two regional Silvers along with an invitation on merit to the 2018 Youth Olympics.

“Carl is an awesome coach, and the handball program is one of the best on our island.  He built his program from nothing and is the only sport to win an Oceania Gold Medal with all local girls” said June.  She added, “I wanted my students to experience a high level of organized skills and competition and I knew Carl and his handball team were the ones who could provide that.”

Also assisting is conditioning and defense coach Vaha Mafileo who said, “It’s been a fun week.  The students picked up the game quickly and were having fun.  All of us coaches see some real potential and we hope to see some more students from Pacific Horizons coming to our after school programs.”

Tia Cummings and Amalie Chen, are the first students from PHS to make the U16 National Women’s Handball Team. They have been training and playing consistently for over a year in preparation for the Continental Championships, whenever the borders open up.

“I really appreciate the opportunity to present our game to the students of Pacific Horizons School,” said Coach CJ.  He added,” I’m all about our local athletes so anytime that we at ASHA can expose our game to students and potential athletes, I’m all in. I’ve worked with June many times over the years and she runs a tight yet fun ship.  She thinks outside of the box and her students are lucky to have her. Our PE sessions were very successful.  Anytime that the kids sweat and smile at the same time we are happy.”

ASHA has held the second round of games from the 1st phase of their National Street Handball Nationals (Flag Day). The Mighty Lupe is off to a strong 3 and 0 start with 2 victories over Team Malosi and 1 victory over The 300.

The Mighty Lupe had a very tough and exciting game against The 300 last week Tuesday, eventually winning both halves 12-11 and 13-10 behind the scoring of Mataula Niko Fale (12) and Misa Si’ilima (8). High scorers for The 300 were Joey Sagapolu (6) and Maea Loe (5).  Georgia Moananu, one of ASHA’s newest players came up big with 4 points as did Janenoreen Talalelei who added 2.

Last Thursday The Mighty Lupe faced off against Team Malosi, which was looking for their first win.  The Mighty Lupe took advantage of the miscues created by their press defense to force Team Malosi to take bad shots and turn the ball over.  Winning the first half 5 to 3 it seemed that both teams were not on top of their games. After switching Summer Samuelu from Pivot to Goalkeeper Team Malosi found its rhythm and behind the strong performance of Memory Viliamu, who scored 11 of Team Malosi’s 12 total game points and the newly found keeper skills of Summer Samuelu Team Malosi won the second half 9 to 4 to force an overtime shootout.

The final Thursday game between The Wolves and The 300 was another tough and tight overtime game. Dianne Loe led The Wolves in scoring with 9 points and helping her was Josh Magele (4), Amalie Chen(2), Lynne Taupaki (1) and Jasmine Lafaele (1).  Top scorers for The 300 were Maea Loe (8), Joey Sagapolu (7) and Saitupu Seui (4) with Janenoreen Talalelei adding a point. The 300 fell to 1 and 3 in the loss.

The official standings sit at The Mighty Lupe 3-0, The Wolves 2-0, The 300 1-3 and Team Malosi 0-3.  The 1st phase of the Nationals were completed this week and the 2021 National Flag Day Championships will be held this Saturday at Lions Park beginning at 10am.  The public is invited to come and enjoy a day of handball.