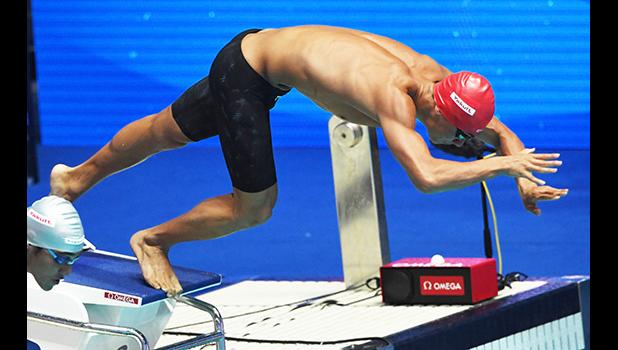 Gwangju, SOUTH KOREA — What a day at the FINA 18th World Swimming Championships. Day 6 saw the Men’s 50m Freestyle commence with 130 entries. 20-year-old, Micah Masei was representing American Samoa. This was Masei’s second race of the week, earlier competing in the Men’s 100m Breaststroke with a time of 1 minute 5.24 seconds.

In the Freestyle, Masei clocked a finishing time of 24:05 seconds, which beat his entry time of 24:14 seconds, so how was the swimmer feeling after his second race of the week?

“ Race felt good but, I don’t know, I’m not overly satisfied with my time. And on the blocks I was a bit jittery.”

Far more experienced swimmers than Micah have felt nervous on the starting blocks at a World Championship. It’s only natural for someone who is making their debut on the World stage. For those of us who have never been in that position, how do you learn to control those feelings when stepping up on to the blocks?

“I think it’s mainly in your head. What helps for me is listening to music and not looking up! But when you’re behind the blocks, I kinda go on autopilot which usually helps, but other times I need to be there and be present in order to swim fast.”

Masei, who describes himself as positive, focused and kooky, described how he felt when he first arrived at these championships in Gwangju, South Korea.

“When I first got here I was like… WOW, where am I? It’s nothing like I’ve ever experienced before so it’s cool being able to get on the blocks with everyone around you and giving it a shot.”

Masei and Tiali Scanlan are American Samoan representatives here, and Masei explained how important it was that they were here with their fellow Pacific island swimmers and how much help they’ve given him during his first Worlds.

“I’m really happy there’s that support for me, so having them definitely helps.”

Regarding next steps for Masei, now he has a World Championships under his belt. He plans to keep learning and working hard. The swimmer spoke eloquently about how he was going to move forward from this race by trying not to over-analyse any of his performances and look to continuously improve on each and every swim.

“I think a big part of it is taking what you can from the race, looking at it, but not over-analysing it too much. And just keep working hard on the things I struggle with.”

He continued to explain what his plan was to achieve his goals.

“I take it in small steps, always trying to win in each Heat. If I keep winning in my Heats, I might eventually make it somewhere.”

We couldn’t leave the interview without finding out what Masei’s best moment has been out of his first World Championships. As you can imagine, choosing just one was quite difficult.

“Just one? I don’t know… Being able to get behind the blocks. I’m always trying to get ahead of people in the race, sometimes it works out and others it doesn’t! But being able to race a bunch of different people from all over the world.”

It was clear to see how much competing at the World Championships meant, especially alongside some of the best athletes in the world. We look forward to seeing Masei perform on many World stages to come.

This article was produced by Simon Smith, Hope Gorton and Glyn McGuire of The Reporters' Academy, a media production company run by young people, tasked with the mission of telling the stories of Oceania's swimmers at the World Championships in Gwangju. The Reporters' Academy is integrated into the world of media, education and employment, dedicated to changing the lives of young people across Oceania and the UK.