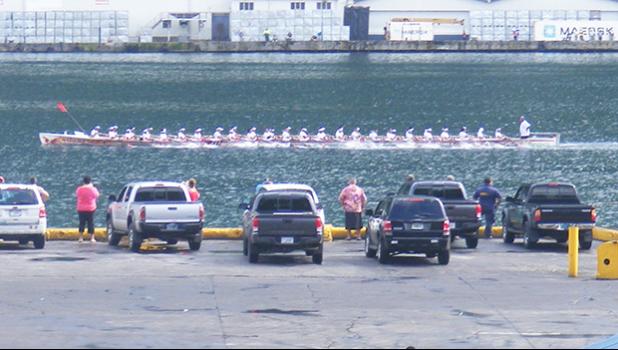 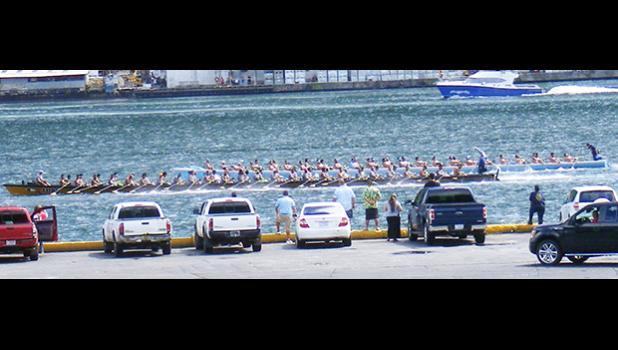 Second heat had closest race of the day
By
Samoa News staff
reporters@samoanews.com

The committee had earlier this week during a captains’ meeting announced that the top qualifying fautasi will be based on the best times to reach the finish line.

Based on the committee’s list, the following are the qualifying fautasi, starting with the fautasi of the best overall time or the fastest time to reach the finish line:

3. Manulele Tausala I of Nu’uuli

Samoa News reporters at the finish line also confirmed that it was Paepaeulupo’o that reached the finish line first, followed briefly by Fuao. The committee’s time sheet, also shows that Manulele Tausala I also did very well in its best time to reach the finish line during the first heat.

Tomorrow’s grand finale of the fautasi race is currently set for 9a.m. depending on the weather.

Before the championship race, there will be an exibition race, or friendly race, starting at 8a.m. between four fautasi: Sua & Vaifanua, Aeto II, Iseula o le Moana II and Manulele Tausala II. Rowers for this competition are mainly youth.

Samoa News will update this story online if more information is available later today or in tomorrow’s edition.

The first heat of the 2017 Flag Day fautasi race got underway about 10 minutes before the 9a.m. scheduled time after the five fautasi were all lined up at the starting line to battle their way to reach the finish line inside the Pago Pago, just in front of the ASCO Motors facility.

At the time of the race, the National Weather Service in Tafuna had already issued around 7:24a.m. two separate weather advisories - high surf and small craft. Forecasters predicted surf of 9 to 11 feet increasing to 10 to 13 feet with local higher sets by tonight due to a southerly swell.

While it was a bit of a battle at the start of the race, it became clear as to the winner, after Manulele Tausala was far in the front entering the back part of Pago Pago Harbor around the old Rainmaker Hotel area. Supporters of Manulele Tausala on the shoreline shouted and car horns blared to declare their victory.

Manulele Tausala was way ahead and reached the finish line before the second fautasi, Matasaua rowed in and raised their oars. Third to the finish line was Iseula o le Moana followed by Fetu o le Afiafi and final one with Fealofani.

The biggest battle for rowers is to make sure their times are good at the finish line in order to qualify for the championship race.

According to Fautasi Committee officials, the seven fautasi with the best times reaching the finish line from the two heats will compete in the final championship tomorrow, with time to be announced soon, and depending on ocean conditions.

KVZK-TV video footage taken around 8:45 a.m.  from the starting line showed some rough seas, and the boat from which the television station crew was broadcasting live rocked a bit back and forth. Video footage of the fautasi boats already at the starting line around 8:45a.m. shows them rocking back and forth as well, however, the Bay Area shoreline was already packed with supporters and lovers of fautasi racing.

Everyone prayed for good weather following heavy rain last night and it cleared briefly by daylight before it started raining again around 8a.m. as fautasi headed to the starting line. But there was no rain when the race got underway.

Samoa News will update this story online as new information becomes available as well as the results of the second heat.

The second heat of the 2017 Flag Day fautasi race, which is about seven miles, began at 10:05a.m. amid some rough seas and a light sprinkle of rain. But the weather didn’t stop fautasi crewmembers from flexing their muscles as each fautasi team dug in for a long battle to the finish line.

Not long after the race got underway, Paepaeulupo’o took the lead and just a few inches behind were Fuao and Taema II with the three fautasi fighting to reach the curve - just off the old Rainmaker hotel. None of the fautasi crews dared to relax their rowers.

It then became a competition of strength and leadership of the fautasi captain, as Fauo caught up with Paepaeulupo’o. The two fautasi took turns taking the lead by just a few seats, as the race passed the curve off Rainmaker Hotel, with the two fautasi crews giving it their all while fans of both fautasi crews cheering - mostly screaming -  from the shoreline.

The crowd started roaring louder as they all screamed for their teams as both fautasi fought to the finish line. However, it was not immediately clear which fautasi reached the finish line first, because it was a very close race.

And it was the competition between Paepaeulupo’o and Fuao that became the best one today so far.  Coming into the finish line third was Taema II followed by Aeto.

The Fautasi Committee will now review their records and come up with the seven fautasi with the best times to qualify to compete in tomorrow’s championship race.

The committee is expected to announced later this afternoon the qualifying fautasi as well as race time, which at this point depends on ocean conditions.

According to the National Weather Service in Tafuna, tonight through tomorrow night will be mostly cloudy with numerous showers. Southwest winds of 10 to 15 mph. For the marine forecast, seas of 7 to 9 feet are forecast for tomorrow.

Will update this online story when new information becomes available with more details in tomorrow’s edition.