Fautasi Fiva 2019: Fans of Leone's Taema II all excited, ready for the race 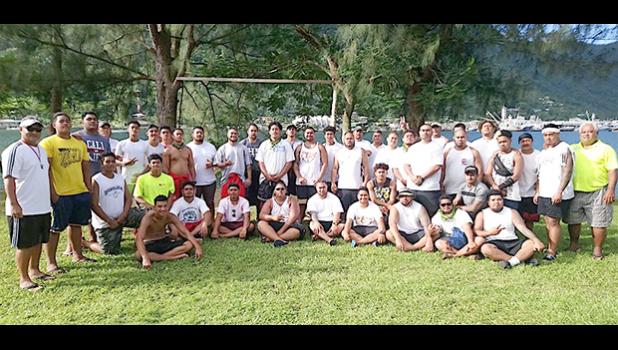 Pago Pago, AMERICAN SAMOA — The Leone Taema II fautasi crewmembers have been training for weeks and from the looks of things, the rowers are anxious to get in the water and glide into First Place this Saturday, April 13th during the 2019 Flag Day fautasi race.

Samoa News has been unable to obtain a comment from Taema captain, Sen. Faiivae Iuli Godinet. But fans have expressed their excitement with the upcoming race, saying they're optimistic that Leone will be the new home of the fautasi championship title. Feautasi Fiva 2019 is proudly presented by Congresswoman Aumua Amata.

Over the next two days, leading up to the Big Race, homes in Leone will be covered with lavalavas and homemade posters, featuring messages and well wishes for the captain and crew.

The Teama is the newest of the 10 fautasi that will be competing on Saturday. (The Fetu ole Afiafi is out of the race, having sustained irreparable damages earlier this week).

The Taema II was christened in 2015 under the motto: "One heart, one voice, one team." This was after the village went 50 years without a fautasi.

But the quarter-million-dollar longboat is yet to win a championship title.

The crew trains diligently and can be seen in Malaloa every evening. Chiefs, villagers, and fans are always out there with beach chairs and mats, as a show of support for the only fautasi representing the far West end of the territory.

As with all other fautasi crews, the Taema has one goal. And that is — to win.

Let's see if the Lady Taema II has what it takes to capture Gold this Saturday.