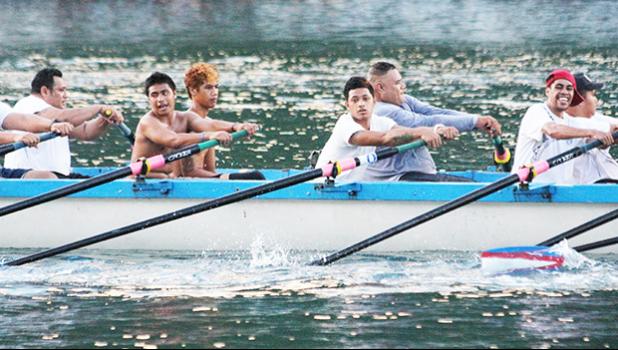 The Iseula Ole Moana fautasi crews from the village of Fagatogo are prepared to take on the challenge of bringing home the ‘Mua’ in this year’s Faigamea i le Tai – as their skipper Samia Pino Mata’afa told Samoa News their youth is the focus of it all.

Similar to this year’s 2017 American Samoa Flag Day theme – “Tupulaga mo a Taeao” (or Youth for Tomorrow), the village of Fagatogo is concentrating mainly on their youth as skipper Samia emphasized to Samoa News that their goal coming into this years Faigamea i le Tai, “is to bring the youth together again, form a stronger bond within the young generation of our village – mainly to keep them away from drugs and alcohol.”

When asked how long they’ve being preparing for the 2017 Flag Day Fautasi Regatta, Samia told Samoa News, “… Our crew and our aumaga are ready and prepared to compete and honor the celebration of Tutuila and Manu’a’s Flag raising ceremony – this is our fifth week of preparations, and I can say that we’re ready to compete in today’s Faigamea i le Tai”.

Samia continued, “As of now, all our kids are ready — their strength, stamina, and overall fitness is there. We even emphasized a diet plan within these five weeks of training, to try and mend their appetite to our expectations of a fit auva’a who’ll represent the village of Fagatogo in this year’s race.”

Samoa News asked Samia about the methods they used in training the Iseula Ole Moana crew this year – are there some new strategies mixed in with the usual. He responded, “There are no new strategies or methods to our preparations – we’re sticking with the basics that we began with from the very start.”

He said, “The majority of our conditioning and running phases of training – we always try to test the faith of our boys by running them uphill at the Tramway, or here within our village going up to the mountain area.”

The Fagatogo skipper told Samoa News that methods aren’t what they’re focused on – instead they’re concentrating on strength. He said, “The most important thing is that our auva’a will absorb and have the strength to row the boat from the starting point, all the way to the finish line — the most important thing to us is that we reach the finish line.”

Reflecting on some of the changes made to the Iseula Ole Moana fautasi crew this year compared to past years, Samia said, “There isn’t that much of a change – the only difference is, this year, we have two new rowers that have joined our old crew from last year, but as far as the crew is concerned, we have the same old crew members from last year” — as he referred to the returning members of the Iseula Ole Moana III – and to their new high-tech pride and joy.

He concluded with a thank you “to all our families and friends who supported us with food, water, donations, and monetary support – as well as some of the businesses that came through and supported us throughout the process. We thank you very much from the bottom of our hearts for wanting to support and make a change within the lives of our young generation as well as the auva’a of the Iseula Ole Moana.

“Our special thanks goes out to the Sons and Daughters of Fagatogo, who are here and abroad, for their prayers and thoughts – those of you who are off-island in Hawai’i, San Francisco, and Seattle, and all of those out there who are praying and thinking about us as we prepare to represent our village in tomorrow’s race to celebrate this year’s Flag Day Ceremony” Samia said.