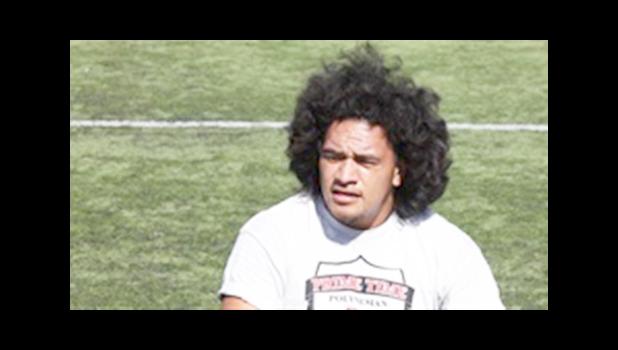 Charged with possession of Meth – BUT, “no one knew the whole story”
By
Tony Gasu
tony@samoanews.com

American Samoa’s football prodigy, Austin Maloata, recruited out of Leone High School to be part of the Oregon Ducks football family was charged and arrested for driving under the influence (DUI), reckless driving, and possession of methamphetamine, on November 12, 2016, just after the Oregon Ducks’ 52-27 loss to Stanford, according to The Leaf-Chronicles, an Oregon newspaper.

He was embarrassed by the media —reported as ‘this dude that did meth’ said Maloata, when he had the opportunity to respond to the critics and the rumors — which led to being kicked off the Oregon Ducks football team eight hours after his arrest at an intersection near campus, after being involved in the car crash and measured with a blood-alcohol level at 0.11, above the Oregon legal limit of 0.08, another newspaper — The Oregonian — reported.

But none of the reports said that the methamphetamine found in his car was left behind by one of the six passengers Maloata was carrying at the time of the accident — all of whom fled the scene, according to Maloata.

He told media, “They ended up blowing me up as this dude that did meth — no one knew that there were six other people in the car.”

Maloata said he was the victim to take the blame, “No one knew the whole story, they just thought I was driving around with drugs in my car by myself. No one knew that I went to pick someone up, no one knew any of that – so I ended up taking the blame.”

The young football player, who was on the rise at the Home of the Ducks, being a three-year starter at Defensive Line with a bright future — saw his career in collegiate football come to an end after a bad decision that changed his life.

However, this has led to him getting a second chance from the Home of the Governors, Austin Peay University in Tennessee, but not before Maloata had to go through multiple court dates.

The felony charge for methamphetamine possession was dismissed on December 13, 2016, according to Lane County Circuit Court documents.

Maloata said of this tragic incident in his life,  “if it wasn’t for my family to help me through that situation, I probably wouldn’t be here right now” referring to his opportunity at Austin Peay University.

Maloata said his ‘aiga’ were there to help him deal with the aftermath of his arrest, the feeling of being left high and dry, and trying to figure out that next step — he was kicked off the Ducks’ team before his case was heard.

He said as a next step, he contacted other programs to explain what happened; and fortunately, a mutual connection helped him get in the door at Austin Peay University and eventually led to Maloata being on campus.

APU’s Athletic Director Ryan Ivey said, “I talked to him personally and know what his goals are and certainly believe that this coaching staff and the people here at Austin Peay can help him achieve those goals – both on and off the field”. He added, “I feel comfortable with our vetting process and what we’ve done. I feel comfortable with the information that we’ve been given.”

During Maloata’s video interview with Ayrika Whitney of USA Today Network, the football player reflected on this second opportunity in life to pursue his football career. “The aspects of everybody having hope in this program, because all these coaches could’ve gone somewhere else – I was glad to talk to coach Ili, he was able to elaborate more on like, the mission impossible.”

He continued, “Like I said, to build a foundation up – the next three or four to five years from now. He talked to me about the culture he was trying to build, he talked to me about the type of environment that he has here, and that’s also why I kind of bought into – I’ve already been through the process of gear and everything, the main thing was I knew that I could come to a school that I knew I would be taken care of, as far as coaches, which I am and that I’m really grateful for.”

The Governors Head Football Coach, Will Healy who was excited to have Maloata on his squad said, “He’s a consistent one. He’s genuine. It’s not like I’ll tell you what you want to hear and then you do something else on the back end. He’s been a team player, and he’s worked hard to develop relationships with other guys on the team.”

Healy said, “And he’s been legitimately excited about this opportunity even though he had a million others that from an outsider’s perspective were better opportunities.

As of three weeks ago, Maloata was participating in the Governors Spring practices.

Maloata is overwhelmed with this second chance to play football and said he was sold on the culture that Healy has established. He said, “It really made me think of something else besides myself – that’s why I chose here over some other schools like the West Coast.”

However, Maloata will be sitting out a season due to NCAA transfer rules.