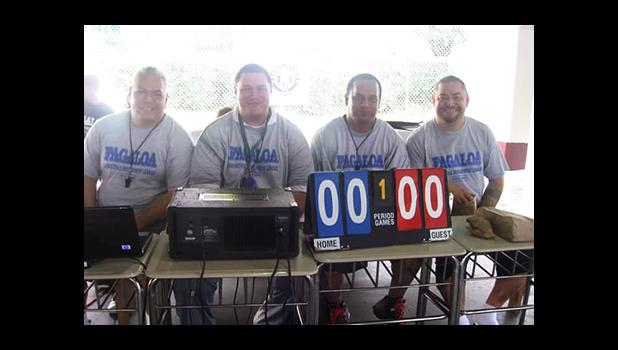 10 years ago – was when ASBA started, at Samoana High School gym
By
Tony Gasu
tony@samoanews.com

Tomorrow, the American Samoa Basketball Association will officially open their 2016 Moso’oi Basketball Tournament — to be hosted at the Samoana High School gymnasium, with live basketball action scheduled to tip off at 9am. ASBA has scheduled seven action packed match ups to kick off this year’s tournament.

Samoa News spoke to the secretary of the association, Pua’auli Paul Amituana’I, who said that ASBA’s preparations for this year’s tournament started awhile back, he said, “The American Samoa Basketball Association’s preparations took a long time coming towards this year’s Moso’oi Tournament.”

He said, “This year, the association has added new divisions within the Moso’oi League — Kids Division, Under 18 Division, 40&Over Division — plus the two that we started with, the Men’s Division and Women’s Division — so overall, we have a five divisional competition this year. I know everyone will enjoy it.”

Samoa News asked Amituana’i about the changes that they’ve made to the tournament this year compared to past tournaments that they’ve hosted, and he said, “Just some few rules for the Men’s Division is Men-2-Men Division – for those registering for the 40 & Over Division, they have to show ID in order to play.”

Amituana’i mentioned that the Moso’oi Tournament this year will “most likely take 2 and a half months.”

He told Samoa News that the association is focused on the local talent from the young generations leading up to the adults. “Our goal is to develop our local talent here in American Samoa, from our children all the way up to our seniors — especially within our wellness program as well as the Women’s Division.”

Amituana’i said that for the association’s future events, they are looking to compete internationally. “While hosting this year/s Moso’oi Tournament — the American Samoa Basketball Association is preparing for another International approach as of competition. The ASIA Games, where our Women’s National Team won Silver – in the Pacific Games.”

Tomorrow being the opening for this year’s Moso’oi Tournament, the American Samoa Basketball Association in collaboration with the GHC Reid & Co. along with the Department of Youth and Women Affairs would like to acknowledge Samoana High School’s Principal, Siatu’u and their Athletic Director Jessica Tuu and staff – for the use of their gymnasium for this year’s ASBA Moso’oi Tournament.

Amituana’i concluded. “It’s an honor and pleasure to go back to where we first started when we were the Fagaloa Basketball Development Association — this is where we all started 10 years ago, today!”