Am. Samoa to compete in 2016 South Pacific Bodybuilding Championships 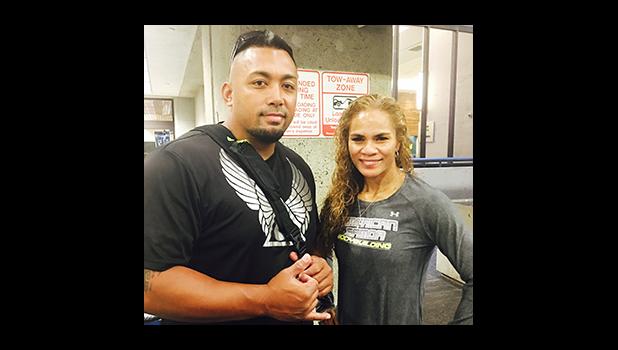 Ursula Te’o Martin is a woman of fierce determination, and could be considered a pioneer in her own right. With legacies to honor, and trails to carve, she is a daughter of American Samoa who has embarked upon a path few females have taken in the athletic world — she is building a reputation as a world class Bodybuilder.

While there, she will be participating in two separate female events: the Women's Bodybuilding Over 55kg and Women's Figure Over 165cm.

This is the first time American Samoa will be participating in this South Pacific Bodybuilding Championship and Figure Competition, and in an email message to Samoa News, Ursula said, “I feel honored to represent our island home once again.”

She noted that she has been training diligently since winning the Gold Medal in Papua New Guinea last year July at the Pacific Games.

Her preparations and ongoing training were not only for Tahiti, but also to compete in the biggest Bodybuilding show hosted in Hawaii, the National Physique Committee "Paradise Cup" which will take place in the Aloha State on November 12th this year.

She said, “I am elated as the Paradise Cup is being hosted the weekend of Veterans Holiday, and being a United States Veteran — I will use it as a good luck charm!”

For now, she is on her way to Tahiti, traveling with her coach, Shane Lyman of Hawaii’s Elite Athletic Training/ Mana Barbell Gym.

Te’o Martin wasn’t always a bodybuilder, but she was always interested in physical fitness, nutrition, and a lifestyle that promoted optimum health. When questioned about her new field — bodybuilding — she said, “While I was pursuing my undergraduate degree in Exercise Sports Science, a few of my colleagues were competing in the sport. They kept telling me that I should consider competing. When I told my late husband Colonel George "Doc" Martin I might be interested in the sport, he expressed to me that Polynesians-Samoans are naturally blessed with the muscular genetics, and that it would be a tragedy if I did not pursue the sport. When I learned Bodybuilding was a competitive sport at the Pacific Games I set a goal that it would be the very first stage that I would compete on, and represent not just myself but my island home.”

She represented well and with dignity, as she came home from those games with a gold medal.

She added, “ Bodybuilding is another way for me to honor my husband’s memory, as he encouraged me to pursue this sport.”

Locally, Te’o Martin is working with ASNOC to officially recognize the American Samoa Bodybuilding Association in the Territory. She stated that “Mr. Ed Imo has been very instrumental in guiding and assisting me, and I’m very grateful for his mentorship.”

Several years ago, she earned an M.S. from the American College of Sports Medicine, and became an Exercise Physiologist and Certified Personal Trainer.

Te’o Martin said, “I love this sport because of the culmination in each area of discipline required of me — the physical training (work, rest, recovery), nutritional intake, and the emotional, mental and — most importantly — spiritual strength that contributes to the overall health and physique of the body.”

What’s on her agenda following the Tahiti and Hawai’i competitions?

She said, “I want to compete in the Las Vegas Classic next year November, 2017. My father has always wanted to see me compete on stage, and in Vegas, he can personally attend.”

Samoa News sends kudos to Ursula, and best of luck in the competitions ahead.