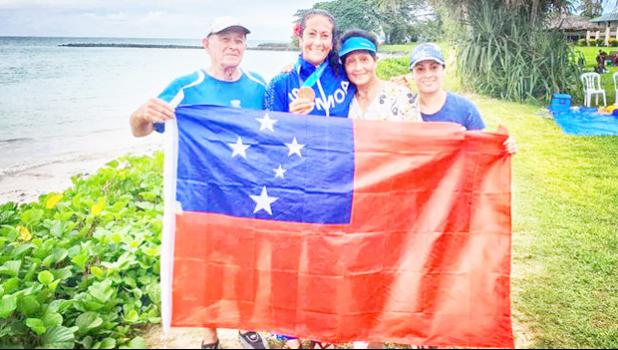 Apia, SAMOA — A deal has been struck to allow news from the Pacific Games to be broadcast in Samoa.

Local stations were being charged US$750 for three minutes of daily content.

Live coverage will continue to be on TV3.

Payumo was driving around a blind curve and hit an oncoming van, which was encroaching over the middle lane. Both drivers swerved to the same side and collided, Payumo said.

In the Guam van were players JP Cruz and his wife Maricel, Willie Stinnett, Billy Belger and Ben Borja. Cruz received three stitches to his chin. Stinnett had bruised shins, and Belger had cuts to his shin that required stitches. Borja had bruises but was OK.

It's unknown if Belger will be able to continue playing. Guam's physician, Dr. Luis Cruz, attended to the squad and cleared the rest of the team.

To witness young Samoan athletes stepping up to win gold, silver and bronze from the 2019 Pacific Games for our country, is a testament to Government’s long standing ultimatum to invest in our youth, says Prime Minister Tuilaepa Sailele Malielegaoi.

As of last night, Samoa so far has won six Pacific Games gold medals, four from swimming, one from archery and one from lawn bowls, five of them by young athletes. Added to that are the Gold medals being won by young Weightlifters in the Junior Oceania and Commonwealth championships being held alongside the Pacific Games.

The Prime Minister says that bringing major international sporting events to Samoa is a long standing investment for our youth.

“These events will create new opportunities for our young gifted athletes to realize their full potential,” says the Prime Minister. “Sport is a lucrative career associated with well-paid contracts to support families, villages and our country,” he continued.

“And it’s a bold investment by Government which is commended internationally.”

He said Samoa is always mindful of the spin-offs from hosting international events and he is urging Samoa’s youth to take advantage of every opportunity not just to represent Samoa but to realize their God given talents.

“For me, my participation in the Pacific Games is more to inspire our young people to follow suit,” he said. “Very rare do you see an old chap like myself competing in sports and it’s not for fame but more to motivate and encourage the youth of Samoa,” he said.

Tuilaepa is competing in his second Pacific Games as a team member for Samoa’s Archery.

He won a silver medal in his debut Pacific Games performance, the last time that Samoa hosted the regional event in 2007.

Table Tennis Asia Ata Faasavalu was confident he would scoop Gold for Samoa in the men’s singles.

Samoa missed out on a medal in the mixed team in Badminton Wednesday night when Fiji took the Gold in an astonishing win against New Caledonia.

Samoa also looks at weightlifting to pull its medal tally up before the week ends.

Prime Minister Tuilaepa Sailele Malielegaoi has made it to the medal contention round and may win a bronze medal in archery on Friday.

He will be competing in the Mixed Doubles Compound Category along with one of the youngest members of the Samoa archery team and bronze medalist, Naifoua Vise Timai.

They will be taking on Tahiti for the bronze in Friday’s finals.

The University of Sydney 20 year old Samoan student, Sosefina So'oaemalelagi of Maugafiafia, Leulumoega and Ulutogia, is confident Team Samoa will medal in the triathlon race.

After close to five months, since taking up the sport, So'oaemalelagi confided in Newsline Samoa that her passion for the grueling three-part race is inspired by her family.

“A lot of my inspiration is from my family, my grandmother, parents and siblings have all played a really big role in my personal drive to be better than average.” She said.

“ Triathlon has given me the opportunity to grow in ways I hadn’t experienced before through the training and the comradeship of being part of a team of like-minded people.

So’oaemalelagi said she has been encouraged to push beyond what she thought herself capable of.

Coping with the challenges have helped her to not only grow as an athlete, but also in many other areas including better time management, focus, setting goals and much much more.

The triathlete train with the others as a team but in her experience so far, triathlon is very much an individual sport.

“There is nothing better than training together, experiencing total exhaustion, nervousness, setbacks, improvements, growth, laughter, pain and everything else in between with your team mates.”

Being the only female member of the team has its own challenge, however, her drive to become better each time, has enabled her to endure the difficulties of the sport.

Despite the dominance of Tahiti, New Caledonia and Fiji at the Pacific Games Vaa being held at Mulifanua, Samoan firefighter Anne Cairns has won a bronze medal for the Women’s V1 500m sprint.

Ms Cairns is a New Zealand Samoan whose parents met when her father Lawrie Cairns came to Samoa in the 70s as a New Zealand Land Information Surveyor.

“Dad was a Secretary of the Sailing Club and he used to be one of the starters for the Sailing races.”

Anne’s support crew of Mom, Dad and her sister flew into Samoa yesterday to surprise her.

“I thought that they weren’t going to be able to come because Mom was going to see a doctor, and my sister was busy with work;

“But it’s just the best surprise ever, because we were really hoping to get Mom here”.

Anne lives in New Plymouth with her partner but works in Palmerston North as a full time firefighter.

Anne is racing in the V1 16km Marathon on Friday and the V6 24km Marathon with the team on Saturday.