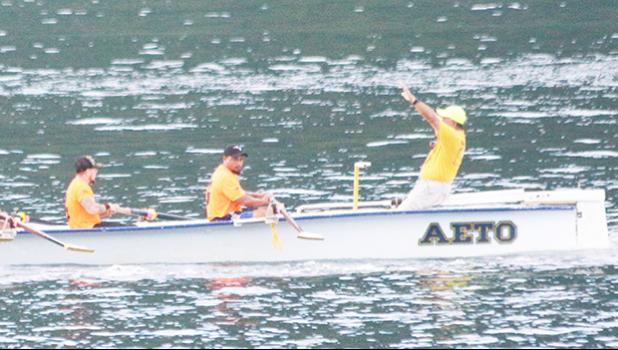 The Maoputasi district and the village of Pago Pago are preparing to re-awaken the Aeto’s tradition of winning – ‘o le Mua’ – as the return of skipper Va’amua Henry Sesepasara not only brings back hope, but the spirit of competition and determination within the aumaga, whose members are competing and striving for a seat on the Eagle — when ‘the best’ of them is selected to compete in the 2017 Flag Day Fautasi Regatta.

Returning to the helm of the Aeto after a two-year absence to captain the village fautasi, Va’amua told Samoa News that “the past two years have been the motivation and drive for the auva’a during their preparations for this year’s ‘faigamea i le tai’ – a challenge to this year’s crew members of the Aeto to bring back the tradition of winning to the village of Pago Pago.”

Va’amua told Samoa News, “It’s a village tradition here in Pago Pago — if we don’t achieve our main goal, we focus on the future and concentrate on strategies and ideas to improving towards our focus or goal.”

He said he was brought up in “the legacy of the Aeto that will forever live on in the history of Fautasi Racing here in American Samoa, when Utaifeau and the aumaga ended the reign of the Tui Vava’u and the Tui Viti from the kingdom of Tonga and ruled as the kings of fautasi racing here in the territory.”

Then Pago chief, who is also the current director of the Department of Marine Wildlife Resources, invokes the history of the Aeto as a banner to rally to:

“For two straight years, those Tongan fautasi’s enslaved our local competitors on island, by taking the championship title of American Samoa’s Flag Day Fautasi Racing – back to Tonga with them, and it didn’t sit well with le Afioga i le Maoputasi as well as  the village of Pago Pago. So we continue with the tradition after we focused and came up with methods to slaying and ending Tui Vava’u and Tui Viti’s reign as champions in American Samoa, when the Aeto defeated them both and brought the championship title back to American Samoa.”

When asked about the Aeto and their current training, Va’amua said, “The crew is back to its old ways of preparations now that I’m back — and the preparations so far look good — our committee is working hard in getting our boys into shape, and it’s not the same as in these past couple of years.”

Va’amua continued “as of now, I’d say our crew is about 80 percent prepared for the race – I know by the time of the race, we should have a full 100 percent to give – we started training since the last week of February and we’ve gone back to our old ways of trainings. As of now, our auva’a is already sleeping together, a method we have had throughout the past years. Even the rowers as well have bring bringing their 110 percent of effort to try and earn a spot on the Aeto.”

According to captain, there are over 60 crew members vying for the 36 seats on the Aeto, so the best rowers will be selected on the actual day of the race – he said, “This is the main reason why these boys have been showing up everyday and bringing their all every evening to show that they are the ones that should represent the Aeto come the day of the race.

“The boys have been working out twice a day everyday – with our morning runs and by the time we’re done everyone gets ready to go about their usual schedule of school and work –  then in the evening, they are back to compete in our rowing practice,” Va’amua said.

He also pointed out, “Our fautasi is very hard to steer, I know that these past couple of years and the skippers that took over weren’t very experienced with steering and controlling our boat – but I have the knowledge to steer and have won a couple of titles with this high-tech fautasi.”

Va’amua said, “Like I always tell my crew, it’s not the captain that wins the race, it’s the crew members that are rowing the boat that win the race – but since I know how to steer and control the our boat, our Aeto is looking good this year.”

Of the race itself, and what has been the major problem each year, it seems, he offers the following advice to the other captains: “Let’s play it fair already – if there’s a boat that’s not following the rules and regulations of the race, then disqualify them – ‘tu’u ia le ava fa’afatafata lea a tatou ua masaniai, aua e uma a le tu’uga ae a le fa’ataulia se va’a ua o fo’i tagi i le komiti ma le kovana ona ese foi lea o se faaiuga ua toe sui mai ai’ – we should make the right calls.”

He said, “If we don’t put our foot down and make an example of the right thing to do, we’ll continue throughout the years with these unfair races – it disappoints me very much because when the captain doesn’t abide by the rules and gets disqualified, it’s not them that are hurting but the actual crew. They are the ones that work the hardest – with their two-a-day trainings, running and rowing every evening have now been for nothing.

“All because the captain decided to play unfairly – the captain is at fault, but the stress and the waste of preparation time is felt by the crew,” the Aeto captain said.

That, “I have another chance to try and bring the Aeto back to its old ways as well as to working with the Utaifeau and the aumaga.

“I would also like to thank our committee for the preparation of our auva’a. I would especially like to thank my auva’a, my crew members for always heeding to advice and always doing what we tell them to do, I know it’s not easy with the generation we have today – the way they push themselves during trainings and everything, is why I want to send them my most sincerest thank you,” the Aeto captain said.

Va’amua concluded, “For those who have been supporting us and our preparations – our sponsors and the companies who’ve donated and helped us out through our practice and trainings, thank you very much.

“I believe that this is another major part that has motivated myself and the crew to try even harder within our trainings and preparations.