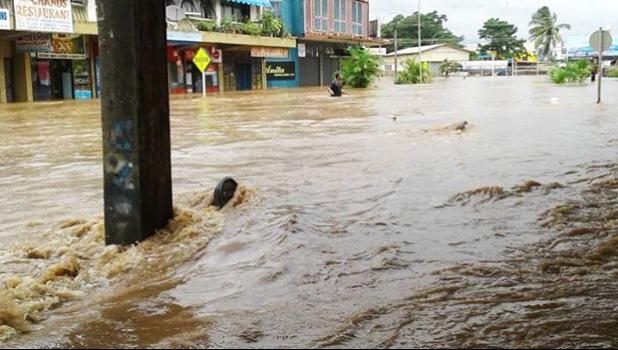 Suva, FIJI — Tropical Cyclone Josie is moving away from the Fiji group but the category one cyclone has caused severe flooding in parts of the country.

Fiji Village online reports four people have died and one person is still missing after being washed away by flood waters.

Police have confirmed that they are continuing the search for a 19-year-old man who was washed away by flood waters in Sabeto Nadi.

Tropical Cyclone Josie was about 200km south south-west of Kadavu at 3pm local time and it has damaging gale force winds with average speed of up 65km/h and momentary gusts of up to 90km/h.

People are being urged to continue to take necessary precautions as a flood warning is still in force for many areas in Viti Levu especially the Western Division.

FBC News says that according to the National Disaster Management Office more than 1,000 people have gone to evauation centres.

It also reports that a ship MV Spirit of Altruism hit a reef amid engine problems and is stuck just past Levuka.

The more than 130 passengers are expected to be transferred to another ship being sent.

The strong winds could bring down some temporary shelters and also damage crops.

People can continue to expect rain as a heavy rain warning remains in force for Fiji.

Residents in Ba and Tavua are without power supply.

As of Sunday night, the Fiji Electricity Authority or FEA says the current weather conditions experienced over the Fiji group has caused a lot of faults within the electricity infrastructure including others.

Customers in Ba District have no power supply as FEA have not been able to access the Rarawai Zone Substation due to flooding.

For the Lautoka District, 90 percent of the customers are being supplied power.

Rakiraki town and the surrounding areas have been switched on using the Rakiraki Diesel Power Station. However, the remaining areas of Rakiraki will be inspected today once the flood waters recede.

There have also been a few faults and damages in the Central Division which has affected power supply to customers in Navua, Koronivia, Korovou & Vunidawa areas.

The Fiji Electricity Authority teams have been working cautiously and safely to repair and restore power supply to these affected areas.

Meanwhile, flood waters in many of these areas are restricting movement of personnel.

The public is advised to stay away from power lines.

Some roads have reopened in flood affected parts in the Western Division as water levels continue to slowly recede.

Motorists are advised to please keep a safe following distance, avoid speeding and avoid areas with water over the road.

All roads are open in the Eastern Division but there's an increased number of potholes on the road network.

Fiji Roads Authority contractors will be carrying out remedial work as soon as the weather clears up.

At this time the Tropical Cyclone does not threaten the Samoa islands.