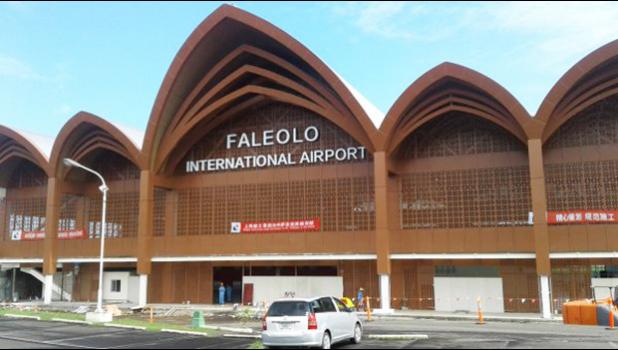 Apia, SAMOA — Construction work on the Faleolo International Airport’s arrival area has now been completed. A grand ceremony is planned for this Thursday afternoon to officially open the airport’s terminals, which also includes the departure area that was opened in November last year.

The state-of-the-art development is in line with the Government’s aim to make Samoa the hub of Pacific air travel.  The multi-million-tala work included extensive improvements to existing terminal buildings, installation of aerobridges and a dedicated power center.

The size of the terminal was increased from 5,500 sqm to almost 12,000 sqm, allowing the facilities to cater for up to 600,000 annual passenger movements with maximum passenger flow volume of 300 passengers per hour.

“For the Airport Authority, this upgrade will mean more business and rental areas from which more tourism-related services can be provided to ensure an improved experience for travellers, befitting of a modern day international airport,” Tuilaepa said in an earlier report.

“The aerobridges will provide a more comfortable experience for our elderly and disabled passengers, not to mention families with small children visiting us for a holiday.

“In essence, the arrival, departure and public areas will all be enlarged with airport-related agencies and services operating from more spacious and functional work spaces.”

A Romanian man, who came to Samoa and used counterfeited cards to steal money from the Bank of South Pacific’s Automated Teller Machines (ATM) as part of a “sophisticated” operation, has been found guilty by the District Court.

Catalin Raazvan has been convicted of 30 charges in connection with the theft.

But it turns that Samoa is not the only country to have become a victim of Raazvan’s offending. The Court was told that on 16 June 2017, the Bank South Pacific (BSP) received an alert from Tonga with a photo of the suspect regarding suspicious transactions there.

Apparently he had taken off before BSP Tonga could launch an investigation into his behavior. The Samoa branch was alerted about some of the types of cards he was using.

One of the bank’s ATM officers found a similar card swallowed at their Main Beach Road branch. The matter was referred to the Operational Risk Team.

“In the meantime, BSP viewed the camera at ATM 01 where it was noted that the same guy in the alert from Tonga resembled 18 June, 2017, but the transaction he carried out was unsuccessful.”

The matter was then referred to the Ministry of Police for assistance.

The Police then took him into custody for questioning before a search warrant was executed on the room he occupied. He was later charged.

Judge Alalatoa noted the defendant stole $3,750 from the bank’s ATM's.

A wave buoy and temperature monitoring mooring deployed on May 2nd off Fiji’s Coral Coast will provide ocean researchers, forecasters, mariners, surfers, and the public with real-time information about wave conditions and ocean temperatures.

This information is critical to coastal early warning systems and to understanding the impact of ocean warming on coral reefs.

“The new buoy is already providing us with vital wave information on the ocean state off the coast of Sigatoka,” reports Fiji Meteorological Service Director, Mr. Ravind Kumar. “This will greatly improve Fiji Met’s marine forecasting capability, and help us predict inundation events along the Coral Coast. For a comprehensive early warning system, Fiji needs more oceanographic buoys like this in other locations, so we hope this is just the beginning.”

This buoy will fill a critical data gap, not just in Fiji but in the Pacific region.

“Around the world there are more than 300 wave buoys, but fewer than 1% are located in Pacific Islands countries and territories,” said SPC Manager for Oceans and Coastal Geoscience, Mr. Jens Kruger. “Now that this buoy is deployed, we’ve reached 1%. Pacific Islanders are custodians of 20% of global ocean space, but we know very little about our region’s wave climate.”

Wave buoys provide measurements of wave height, direction, and period. Without onsite observations from wave buoys, forecasters must rely on satellite readings, which are sparse, and on wave models, which work well in the high seas but do not give an accurate picture of what happens when waves reach shallow coastal zones.

The two Fijian workers in the middle of a dispute that had been investigated by several Government authorities are heading home.

Assistant Chief Immigration Officer, Siaopo Pese, confirmed last night that the Stop Order issued against Tuipolotu Talatoka and Salaseini Serukeitoga, had been lifted and they are now allowed to go home.

The Fijian women were kept in Samoa after their employer, Lei’ataualesa Jerry Brunt, had filed a complaint with the Police, accusing them of removing items from his residence.

“The case had since been closed as the Police do not have sufficient evidence against the Fijian women,” Siaopo told the Weekend Observer.

The Weekend Observer understands that the women are flying home today.

But prior to their departure, they have strongly denied the allegations leveled against them by their former employer.

This was until the Easter Week when the Fijian women left the residence of Lei’ataua. In a letter published by the Samoa Observer yesterday, Lei’ataualesa, who is a lawyer by profession, accused the Fijians of removing valuable items from their home. He claimed that his family is the victim in the matter.

Both Ms. Talatoka and Ms. Serukeitoga deny the allegations. Asked why they left, Ms. Talatoka, said they were afraid because they had been working in Samoa without proper documents. They said they had no work permit and a contract.