With Samoa allowing flights into the country for citizens stranded in N.Z and easing stay at home rules, I think America Samoa should ...
Do the same
35%
Only ease stay at home rules
13%
Keep things the way they are
52%
Total votes: 120
Home 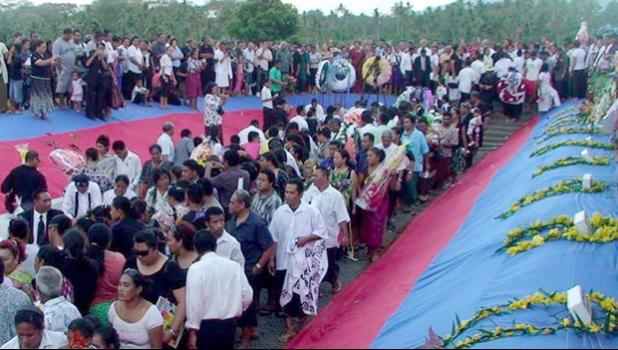 Apia, SAMOA — Church services throughout Samoa on Sunday remembered the victims and the families on the tenth anniversary of of one of the country’s worst natural disasters, the 2009 tsunami.

The magnitude 8.1 submarine earthquake along the Tonga Trench subduction zone generated a tsunami with waves of up to 46 feet which hit the coastline within 15 minutes before an official warning could be issued.

Mostly affected were villages on the East coast of Aleipata and the South at Falealili with damages recorded on Manono Island when the waves curved around Upolu island. The devastation required the shift of many villages inland for safety.

145 people died in Samoa and multiple losses to some families were heavy. Some of the victims were buried at their families and most were buried in mass graves memorial at the Tafaigata cemetery following a public funeral service at Apia Park on a day that the Government declared a public holiday.

Since the disaster, public awareness and safety drills have been stepped up with escape routes built at the residential areas around the coast mostly affected by the tsunami. As a lead up to the tenth anniversary remembrance services, all villages affected at the Aleipata district and villages on the South coast of Upolu, were involved in a major drill named Exercise National Wave 2019 Samoa conducted by several Government stakeholders and the Disaster Management Organisation.

The two most affected villages of Lalomanu and Saleapaga started their commemoration services with a Dawn Candlelight Parade and a Church Service before laying wreaths on the graves of those who died.

Poutasi village at Falealili on the South also set up a special program to commemorate the day.