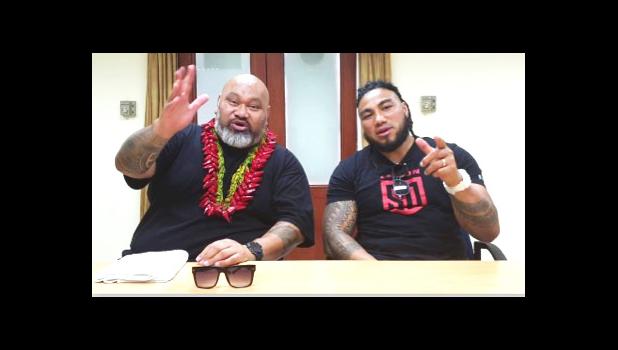 Apia, SAMOA — New Zealand born Samoan, Maa Nonu, one of the New Zealand All Blacks all-time best utility player in the backs is in the country as a “Son of Samoa,”

Maa Nonu with world renowned stand-up comedian Tofiga Fepuleai is part of a delegation of Samoans overseas here to distribute gifts to families affected by the measles crisis. And their humanitarian initiative to help Samoans in need from the crisis is a milestone for the Diaspora Unit endorsed by Cabinet, recently.

The Unit has been silently working behind the scenes in recent months to develop a registrar of Samoans living abroad like Tofiga and Nonu, who are permanent residents overseas but are proud ambassadors for their country of heritage.

And Cabinet in its approval also tasked the Ministry of Prime Minister and Cabinet (MPMC) as the implementing agency to establish networks with outstanding and high achieving Samoans residing overseas, as part of the Government of Samoa’s plan to acknowledge the contributions of our Samoa diaspora and to establish a network with these people.

In fostering close ties with Samoa’s diaspora, Government is also receptive to their role as patriots through any potential assistance they could offer in Samoa’s national developments. And Tofiga and Nonu have demonstrated that they are true Samoans with the Mission of Love this week to provide hope for the families affected by the crisis.

Incidentally while Tofiga and Nonu were welcomed to Samoa on Wednesday, on behalf of Government as the first Samoan diasporas to personally visit the country by MPMC Chief Executive Agafili Tomaimano Shem Leo, Prime Minister Tuilaepa Sailele Malielegaoi was also singing praises for Samoans doctors residing overseas who will be helping with the measles crisis.

From December 23rd to late March next year, 40 medical doctors from New Zealand will be deployed in Samoa on rotation to work with the Ministry of Health in the continued drive to wipe out measles from the country. “Samoans are proud people who always take pride in their heritage and culture and just like most of our pacific brother and sisters; Samoans living overseas tend to give support to national teams, family and church responsibilities and cultural obligations whenever they could,” said the Prime Minister. “It is that sense of patriotism that sets Samoa apart from most nationals in the world.”

In approving the Diaspora Unit, Cabinet noted that the spread of Samoans around the globe has reached new trends and they have accomplished milestones in many walks of life. These achievements have made Samoans world class achievers in different spheres such as rugby, America’s grid iron, rugby league, professional boxing, soccer and many other sports. Others have been household names in the entertainment industry as musicians, producers, actors, comedians, and chefs to name a few.

The Samoan diaspora has certainly grown and had contributed enormously to the global economy through their expertise, talents, and hard works. More than 1 million Samoan Diaspora are scattered all over the world. Meanwhile Tofiga and Nonu will be going out to the families in the villages to share the gifts and message of hope to those affected by the crisis.