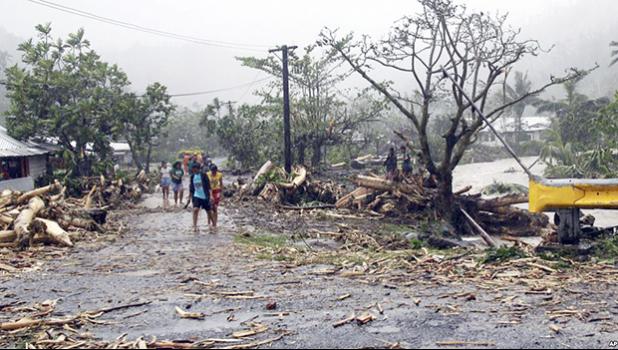 Apia, SAMOA — ‘First and worst’ is how environmental campaigners describe the impact of climate change on the people of Samoa in the South Pacific. The Polynesian nation of 200,000 people fears it will feel the full force of more frequent tropical cyclones, and that rising sea levels will drive them from their homes on the coast with disastrous consequences for the lucrative tourism industry.

Samoa is a jewel in the South Pacific. Its Polynesian culture is rich and heartfelt. Then there are the reefs, beaches and rainforests.

Tourism generates about 20 percent of Samoa’s income. But as the islands’ popularity increases with travelers from Asia and Europe, there is the growing threat of climate change.

In February, Cyclone Gita tore into this part of the South Pacific, causing widespread flooding and damage.

“This particular hotel was underwater — the highest I have ever seen in my lifetime, and it was quite dangerous for the tourists who were here because it took them a while to get out. The water came in so fast that there were still guests in the room,” said Jackson,

REPORTER: So where we are standing now we would be underwater?

JACKSON: “Where we are staying right now we would be underwater, yeah. So in previous cyclones and flooding it would come up to our hips but for Cyclone Gita, you know, it would have been over our heads.”

“We are standing on a multi-million dollar investment that was basically ruined and all that money was lost and that investment was lost because of the impacts of climate change," said Jackson. "It will continue to worsen but what we need to do is prepare for it. The business community as well as, you know, the community at large needs to be prepared for it because it is only going to get worse. The science is very clear on the impacts of climate change on small island developing states; we’re experiencing first and worst and these include things like flooding and cyclones, storm surges and so forth.”

Most Samoans live on a narrow coastal strip on two main islands.

Viola’s village near the capital Apia sits around mangroves, where children catch crabs to supplement the community’s meager income. Homes here are barely above sea level, and when the wild tropical storms come they are swamped, sending villagers to higher ground.

“Yeah, we all worry about about when climate change, especially the water, when it comes up. So it all goes in our homes, in our houses, especially when we have the cyclones. Yeah, the water can go in all our fale [homes], in all our homes, yeah,” said Viola.

Samoa has tried to tame the Pacific Ocean with a giant seawall. But its ferocity during cyclones has caused immense damage over the years.

Susanne Becken, a professor of sustainable tourism at Griffith University, says that vulnerability is harming the nation’s reputation as a safe place to visit.

“Every time there is an event like that it gets harder to get back on the feet," she said. "There is also the perception, I mean, tourism is a major industry here in Samoa, if people get this idea that it is not safe and I can see that maybe there is a little bit of that happening in the Caribbean where there is just one hurricane after the other, people start to avoid those places, so there is this negative feedback loops if you want.”