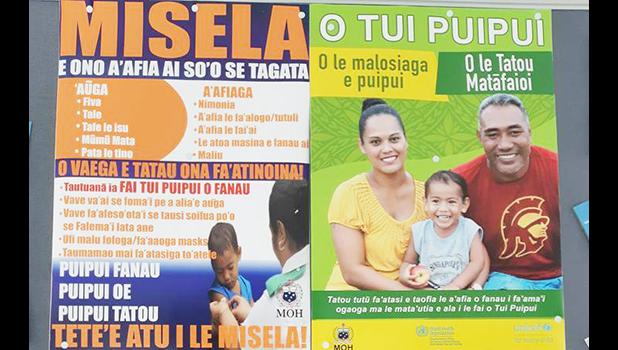 Apia, SAMOA — Samoa's top health official is appealing for help with the measles epidemic as the death toll continues to rise. At least 22 people have died — all but one of them children — and almost a dozen kids are in intensive care.

Immunization against measles has been made mandatory under law in Samoa and a mass vaccination campaign is underway.

Director General of Health, Leausa Dr Take Naseri, said the support from international partners had been tremendous. "We know our staff has been able to cope with this, but we are also mindful that they'll be getting tired. So this is why we are ... calling for help."

Already, UNICEF has delivered more than 110,000 vaccines — sorely needed in a country where just 26 percent of the population is fully immunized.

Tahiti's team join 34 Australians and 30 New Zealanders on the ground, who have been dispersed among the nation's hospitals, vaccination clinics and mobile vaccine units.

As well as two deployments of nurses and support staff, New Zealand has contributed 3000 vaccines.

"The government of Samoa really appreciates the support given so far. Overwhelming support from especially our partners Australia, New Zealand and the World Health Organization and UNICEF," said Dr Naseri.

Prime Minister Tuilaepa Sailele Malielegaoi on Friday asked private doctors in the country to step in and assist public medical facilities with caring for the sick.

"You know already the state we are in without me having to tell you, come and work together with the doctors we have in the public service," Newsline Samoa reported him saying.

Meanwhile, Samoa government's patrol boat has made an emergency trip to American Samoa to collect oxygen to address a shortage in Apia.

The Nafanua II arrived in Pago Pago this morning before returning to Samoa.

It is taking 96 G-size oxygen cylinders.

The territory's Director of Health Motusa Tuileama Nua said Samoa asked for assistance because their oxygen supply at the local Intensive Care Unit was depleting faster than anticipated.

A private clinic in Samoa run by three former nurses is under investigation for allegedly providing measles vaccination without a formal agreement with the Ministry of Health.

This comes at the start of a second week of mass vaccination on the biggest island, Savaii, where people go to hospitals for the immunization shots.

The Director General of Health, Leausa Dr Take Naseri, said a second private clinic which provided vaccination had done so after being approved by the previous National Health Services.

He said that clinic was not part of the investigation but was awaiting re-evaluation by UNICEF and the Ministry of Health to restart administration of measles vaccination.

The ministry's order from last week that no private clinic is allowed to provide the measles vaccination is still in effect.