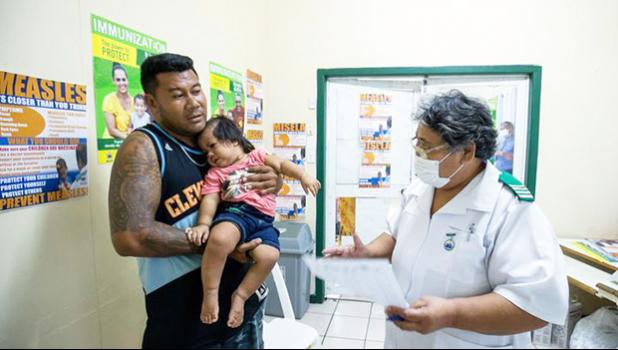 Apia, SAMOA — Another child under the age of five has died in Samoa's measles epidemic, bringing the toll to 77 on Thursday (Samoa time).

The age group makes up almost all of the dead - 121 people remain in hospital, including 17 critically ill children. There were another 53 measles cases recorded in the past 24 hours, bringing the total since October to more than 5400.

Samoa has vaccinated 94 percent of its population against measles following a mass campaign.From next month, it will be compulsory for every child in Samoa to be vaccinated against measles when they reach the eligible age of six months.

Dubbed by prime minister as the 'Law of Love' it was rushed through Parliament under urgency. Prime Minister Tuilaepa Sailele Malielegaoi said the law would allow for stiff penalties for those who did not adhere to the compulsory vaccination law.

School principals stand to be fined up to $US3700 if they allow a child who has not been immunised to be registered in school. It will be a requirement for each child being enrolled to produce their vaccination and immunisation records before registration, without exception.

The law also ensures that all early childhood education centres enforce the law at registration time. The law will come into effect on 1 January, 2020 after the Head of State signs it.

Stuff New Zealand website is reporting Sonny Bill Williams and a handful of other Kiwi rugby stars have raised more than $100,000 for families impacted by Samoa's measles outbreak.