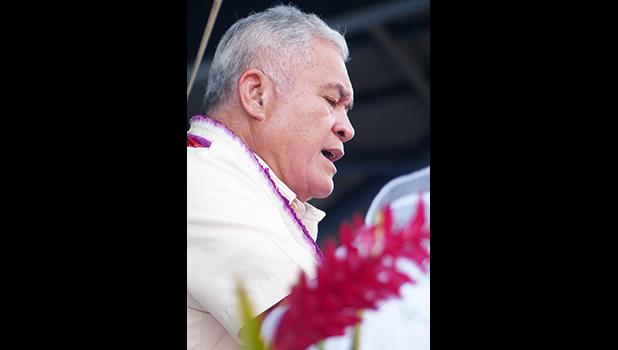 Saipan, CNMI — It is no hyperbole to say that it wasn’t just American Samoa but possibly the entire Pacific region that mourned the passing of Utu Abe Malae yesterday.

That was true at the Commonwealth Utilities Corp. in the CNMI, where Malae was a former executive director.

According to Gary Camacho, the current executive director, the corporation and presumably the Pacific region are in mourning, that yesterday was a sad day not just for CUC but for the entire Pacific.

“This a very sad day for myself personally and CUC. I, along with CUC, will miss his presence and his leadership,” Camacho said, reminiscing on the work he and Malae did together.

Pacific media reported Malae’s death at the LBJ Medical Center in American Samoa yesterday, reportedly due to an unknown illness.

“[Malae] and I spent a lot of time together here. He provided me good guidance over the years. He continued his support even when he had left the CNMI. When I was first placed in an acting capacity, he told me he had a lot of confidence in me and I appreciated that,” said Camacho.

“That was something I needed to have at the time. It was very challenging and a big step for me and he understood the industry and the requirements of the position.”

“His confidence in me allowed me to do the best I can. We talked back and forth regarding storms over the years and he was always supportive, [particularly] in the aftermath of Typhoon Soudelor in 2015,” said Camacho, adding that he recently got in touch with Malae to offer assistance in the wake of a storm in American Samoa. Malae was the executive director of the American Samoa Power Authority.

Malae’s influence was not only limited to the CNMI and American Samoa. He was the vice chairman of the Pacific Power Association in 2001 before becoming the acting chairman of the association a year later after the chairman, a resident of the CNMI, resigned. He was later on in the year chosen to serve a full two-year term with the association as he was working as chief of the American Samoa Power Authority.