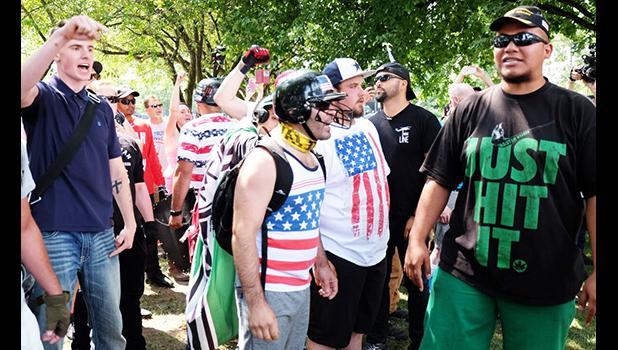 Donovan Flippo, 24, pleaded guilty to fourth-degree assault stemming from the June 8, 2018, attack on a man in northeast Portland. Tusitala “Tiny” Toese, 22, was also charged in connection with the incident but has avoided arrest by remaining in American Samoa, according to Portland Mercury.

Both men have been involved with Patriot Prayer and the Proud Boys, two far-right groups whose rallies in Portland and elsewhere have led to counterprotests and often escalated into violence.

In addition to jail, Flippo received 24 months of probation — during which he is not to participate in any mass demonstrations (50 or more participants) in Multnomah County — and 40 hours of community service, which must be completed within six months, a news release from the district attorney’s office states. He is also not allowed to have contact with the victim. If Flippo violates his probation, he could be sentenced to up to a year in jail.

“This case is about holding people accountable who commit crimes, and I believe this sentence will do that,” said Senior Deputy District Attorney Nathan Vasquez, who prosecuted this case. “This sentence is appropriate when you look at other similarly situated individuals, which is something we must consider when reviewing, issuing and resolving any case.”

Read more at The Columbian