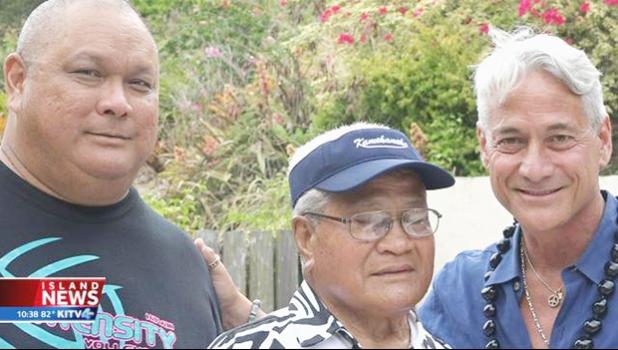 At the 1984 Summer Olympics, diver Greg Louganis took home the gold medal for the U.S. Now, in 2017, Louganis reunited with his birth father Fouvale Lutu here in Hawaii.

Lutu was just a teen when Greg was born. At 9 months, the baby was then adopted by Peter and Francis Louganis.

Lutu introduced himself to Louganis in Hawaii in the mid 1980s and they have kept in touch with each other over the years. Louganis asked Lutu if he could meet his side of the family family, and he did during a week-long reunion on Oahu in July. "Coming to a reunion, I didn't realize I had that big of a family, so it's really been special," Louganis says. "It was a little overwhelming. I feel like, everybody wear a name tag, and who are you related to, so I can make a connection."

From attenting luaus to visiting the Polynesian Cultural Center, the Olympian has learned more about his Polynesian heritage. "I was raised in the Greek church. I knew the Greek dances, the cooking, and all of that, so this was all so new to me."

On this particular night, we joined Greg at his half brother Malcolm's house where he talked story with his ohana -- aunties, uncles, half-sisters, nieces, and nephews.

Fouvale Lutu's son Malcolm is a Honolulu Police officer. He was there with his dad when he met Louganis that first time. "When we first met," Louganis remembers, "he was competing in powerlifting, so we were talking sports. He was a young kid. It was so great."

Today, half-brothers Greg and Malcolm have grown up, and Peter and Francis Louganis have passed away. Greg says it was time. "You know, I want to hear it from the source, because this is where you get the truth, and the heart and really the soul of what happened. I know I got the source right here."

Fouvale Lutu wanted to raise Greg but he couldn't. "I was born in the 1960s," Louganis says. "Times and situations were very different, so I totally understand and I'm just appreciative. I also feel very blessed. My family is much larger that I thought it was, so it's really great."