No reauthorization of Fisheries Management Act expected this year 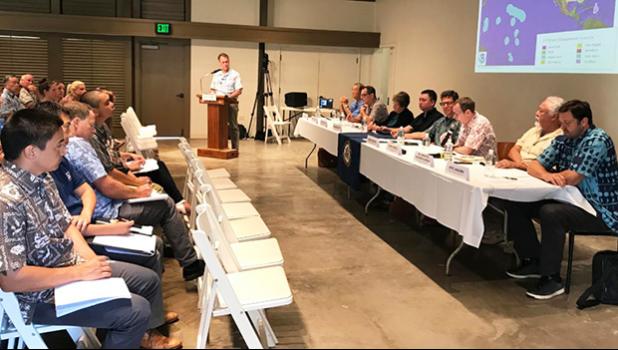 National listening session on Fisheries Management held in Honolulu
Source: Western Pacific Regional Fishery Management Council media release
HONOLULU —The seventh stop of a nationwide listening tour on fisheries management issues was held this past Friday in Honolulu. Initiated by Rep. Jared Huffman (D-Calif.), chair of the House Subcommittee on Waters, Ocean and Wildlife, the session was hosted by Rep. Ed Case (D-Hawai'i) with Huffman participating by Skype. Members of the Western Pacific Regional Fishery Management Council and the Hawai'i seafood industry were among the invited panelists. Their statements echoed the general consensus nationally that America's primary fishing law, the Magnuson-Stevens Fishery Conservation and Management Act, is overall doing its job and doing it well.
"Hawai'i seafood is globally recognized for its high quality and comprehensive management regime, built largely using the MSA framework," noted Michael Goto, a member of the Council and the auction manager and assistant vice president of United Fishing Agency, the nation's only daily tuna auction. "Every fish that is sold through the auction can be traced back to the vessel, contributing to the traceability of our seafood. We are confident when we say 'every pound can be found,' which I know for a fact can't be said for foreign vessels supplying our same market."
"The Hawai'i longline fleet is globally considered a golden standard in pelagic fisheries," said Ed Watamura, Council vice chair (Hawai'i). "Through the MSA process, the Council has developed and implemented measures that have formed the basis of international standards for regional fishery management organizations, such as the Western and Central Pacific Fisheries Commission and the Inter-American Tropical Tuna Commission."
Watamura also noted the success of the MSA requirement for annual catch limits in the Hawai'i bottomfish fishery. "The MSA manages fish stocks throughout their range. Thus, the fishery is jointly managed by the State of Hawai'i and the Council through an annual catch limit (ACL) as prescribed in the MSA. ... Because ACL management is working, the State has opened several bottomfish restricted fishing areas, a move supported by fishermen and scientists alike."
"While being a major contributing industry to Hawai'i, the [longline] fishery is minor compared to international fisheries for tuna operating in the Pacific; for example, the fishery lands less than 2 percent of the total Pacific tuna catch," said Eric Kingma, executive director, Hawaii Longline Association. "International tuna management is a highly politicized arena and the US needs to be doing more to protect its tuna fisheries," he added.
Council Member Anthony Benavente, who serves as the secretary of the Department of Lands and Natural Resources, Commonwealth of the Northern Marianas Islands (CNMI), said the territory is "very supportive of the bottom-up approach in managing fisheries as all stakeholders and interested residents have a chance to participate." He added, "Despite the success of the MSA in the Western Pacific, the Council has had to deal with extraneous conservation efforts that complicate the management decision-making process, as well as hurt US fishing communities and fishers." Examples provided include "the unilateral designation of numerous National Marine Monuments throughout the Western Pacific region," recent legislation that prohibits Hawai'i and the US Pacific territories from marketing their sustainably caught US billfish off island, and current legislation passed by the House that would prohibit the sale of fins from sustainably and legally caught sharks.
During the discussion period, Case said MSA reauthorization would likely not occur this year, but he heard the common thread that our fisheries are better managed than other fisheries and asked what could be done. Kingma noted the Country of Origin Label is already required but hard to find and not required for US domestic seafood. He suggested that something easily recognizable like a US flag on US seafood could be an indicator of sustainably managed seafood.
For the full statements of the Council and industry members, go to www.wpcouncil.org/msa-testimony. For comments from members of other Regional Fishery Management Councils during earlier listening sessions, go to http://www.fisherycouncils.org/msa-reauthorization.