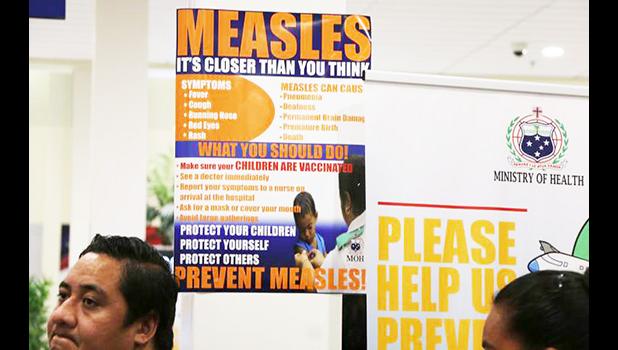 Apia, SAMOA — Samoa's government is warning anyone trying to discourage people from getting measles vaccinations to stop it.

The country is under a state of emergency as it tries to contain the epidemic, which has so far killed at least 16 people.

Under the state of emergency, a compulsory vaccination programme is underway.

In a statement, the government said that under the emergency declaration it is illegal to discourage or prevent people from getting immunised.

"All state of emergency orders ... are legally binding on the community," it said. "The specific order therefore to vaccinate is compulsory, and is to be complied with."

"Any person that actively discourages or prevents in any way members of the community from receiving their vaccination injection, is hereby warned, to cease immediately, and is similarly warned not to take any further action of that kind," it said.

Before the epidemic, measles immunity in Samoa was as low as 31 percent.

Meanwhile, bingo games have been banned in Samoa as the country tries to contain the spread of measles.

The gambling authority says licenced games have been suspended until the state of emergency is lifted.

Schools and other gatherings have already been ordered closed.

The mormon church has suspended all gatherings, while the seventh day adventist church has called off all youth gatherings until further notice.

New orders of State of Emergency as prescribed by the Constitution’s Articles 105/106 are in effect immediately.

The new orders is to further support the Government’s drive to detain the Measle Epidemic in the country and include a number of new compulsory mandates.

The new orders are as follows;

With reference to the Emergency Order dated 16 November 2019, issue the following revised Orders:

The orders was signed Wednesday afternoon after consultations with Cabinet by Member of the Council of Deputies, State, Le Mamea Lemalu Su’a Tuiletufuga Eatuavao Ropati Mualia acting in the absence of the Head of State.