With Samoa allowing flights into the country for citizens stranded in N.Z and easing stay at home rules, I think America Samoa should ...
Do the same
39%
Only ease stay at home rules
11%
Keep things the way they are
50%
Total votes: 234
Home 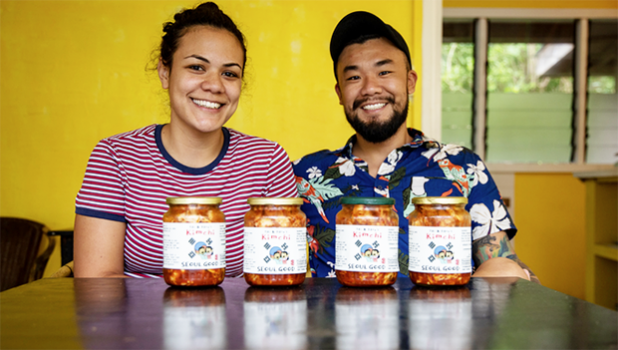 Apia, SAMOA — Lovers of Korean food now have ready access to the most basic staples of its rich cuisine: the humble fermented cabbage dish called Kimchi is now for sale out of a little kitchen in Papauta.

Seoul Good is the three week old venture of partners Tailani Salanoa and Dave Chung, who are armed with five kilograms of spices imported from Korea and a passion for sharing their favourite topping.

Equally at home mixed into soup, rice, with barbequed meats or even a grilled cheese sandwich, kimchi is Mr. Chung’s comfort food when he is missing his mother’s cooking.

Mr. Chung, originally from Chicago is a Korean American who came to Samoa four years ago as a Peace Corp Volunteer. He is still here, and now has teamed up with Ms. Salanoa to get his mother Young Chung’s flavours into the Samoan palate.

And there appears to be a ready-to-go consumer base. In just six days, Seoul Good sold 60 jars of kimchi to excited fans of all shapes and sizes. Their first batch of 15 jars sped out of the kitchen in just three days, and their second of 45 went in the same time.

“I’m thinking it’s this whole Korean craze that is happening,” Ms. Salanoa said. “They see it on social media or hear about it in movies. That is why I started making it!”

It's a dish that even brought the two budding chefs together. Their first date was over a kimchi and cheese toasted sandwich, they shared.

Kimchi, is a staple in Korean cuisine, a traditional side dish of salted and fermented vegetables, such as napa cabbage and Korean radish, made with a widely varying selection of seasonings. Recipes vary for the famous side dish — much like your mother’s homemade jams and chutneys.

Homemade Kim Chi in American Samoa has long been a common item — not only made with cabbage, but also cucumbers, green onions, eggplant, green beans, daikon… and the list goes on. It can be bought at most Asian stores, including your ‘ma & pa’ type of stores in various villages on Tutuila.

Korean cuisine is a favorite in American Samoa — and is served at the Oasis, Manuia Restaurant, Moon Korean Restaurant, and Sook’s. Specialty Korean dishes can also be ordered at various Chinese restaurants, as well as some restaurants serving ‘palagi’ food.