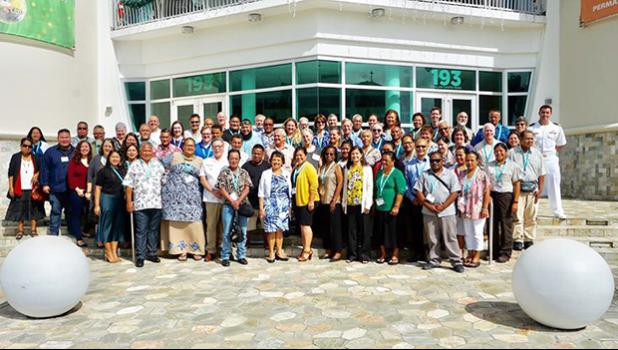 Over 75 insular area government officials, historic preservation officers, natural and cultural preservation experts, and non-government representatives met to share and discuss opportunities under the World Heritage Convention, the National Historic Landmarks program, and other ways to preserve and protect historic, cultural, and natural resources in the U.S. Insular Areas.

Participants represented the U.S. territories of American Samoa, Guam, the Commonwealth of the Northern Mariana Islands, and the U.S. Virgin Islands as well as the Republic of the Marshall Islands (RMI), the Republic of Palau, and the Federated States of Micronesia (FSM), including representatives from Pohnpei, Chuuk, Kosrae, and Yap.

“We were excited to convene World Heritage experts and cultural, historic, and natural preservation specialists on Guam for an information-sharing workshop and to strengthen grants management under the Historic Preservation Fund,” said Douglas W. Domenech, Assistant Secretary Insular and International Affairs. “An added benefit to the protection of such resources is the potential for increased tourism and job opportunities. We are happy to support economic development in the insular areas, including heritage tourism.”

Dr. Robert A. Underwood, former president of the University of Guam and former Delegate to Congress, gave keynote remarks suggesting participants consider weaving historical features of the Micronesia region, in a way not previously conceptualized, through stone heritage sites such as the Latte Stones of Guam and the Marianas, Pohnpei’s Nan Madol, Kosrae’s Mahkontowe, and other features such as fish weirs in Yap and the Marshall Islands or the star mounds in American Samoa.

“We must define our Pacific heritage in our own way and in ways that demonstrate our strengths rather than just our vulnerabilities,” recommended Dr. Underwood. “It is the only viable approach to ensuring its authenticity, legitimacy, and increase understanding about who we are as a people.”

The World Heritage Opportunities Workshop was conducted over two days with participants sharing perspectives on the overarching importance of World Heritage before discussing preliminary steps needed to be taken to become listed as a World Heritage site. In addition, the participants reviewed lessons learned, as well as management opportunities and challenges at the following World Heritage sites in the U.S.-affiliated Pacific Islands: the Rock Islands Southern Lagoon, the Bikini Atoll Nuclear Test Site, the Nan Madol Ceremonial Centre in Eastern Micronesia, and Papahānaumokuākea Marine National Monument. The group also discussed opportunities under the National Historic Landmark Program and how to support the insular areas in connecting with the larger World Heritage network.

Throughout the week workshop participants were able to visit exhibits in the Guam Museum and other sites on Guam including: the Guam Legislature Building, the only Gold LEED-certified government building in the region; the Chocolate House in the Plaza de España; Hagåtña Latte Stone Park; War in the Pacific National Historical Park; and the Guam Wildlife Refuge at Ritidian Point. At Ritidian, Refuge employee Brian Leon Guerrero gave workshop participants a walking tour that included watching baby sharks swim in the “shark nursery”, visiting ancient Chamorro latte stone sites, and viewing ancient limestone cave pictographs believed to be from around 1500 B.C.