Hundreds march in Apia in support of Samoan judiciary 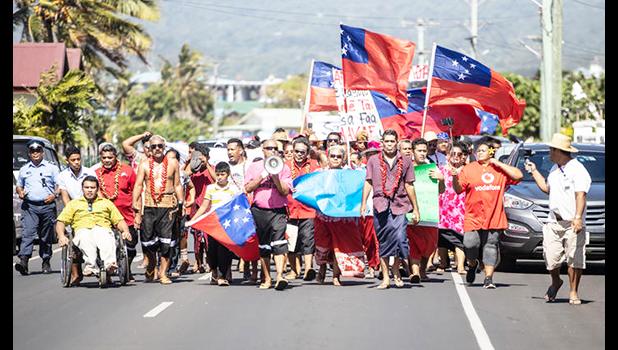 Apia, SAMOA — More than 500 people are estimated to have taken part in a march in support of the Samoan Judiciary and calling for an end to the current political stand-off between two political parties.

The Samoa Observer reports the march was organized by So'o'au Va'a and Maylynn Brown and included some members of the Returned Servicemen's Association (RSA) carrying flags of New Zealand, Australia and the United States to represent the Samoan diaspora in those countries. The Samoa flag was prominent at the rally. An Israeli flag was also spotted.

Placards read "No one is above the law" and "We stand for the Judiciary of Samoa".

One RSA member Peter Jensen said the current situation seems like a ball game between two teams trying to score points against each other.

"Samoa needs a Government; we've got to have a united Samoa," he said.

"We just hope that someone will see the light," he said.

She said the ordinary people of Samoa were sandwiched between interest of the two main political parties.

She said this is what spurred a thought "that we needed to rise, we needed to voice our thoughts, to tell those at the top that we have rights".

The organizers said that the march was not in support of any political party but was in support of FAST leader Fiame Naomi Mata'afa as the first 'Samoan female Prime Minister'.

GAGAIFOMAUGA NO.3. RALLIES BEHIND C.J., FIAME

Baking heat did not discourage hundreds of people from the Gagaifomauga No.3. constituency from rallying in support of Samoa's judiciary and Prime Minister-elect at a demonstration on Wednesday afternoon.

The demonstration was held to complement a march in Upolu with the same stated aims.

Because they could not make the trip over, Gagaifomauga No. 3 constituents organized their own show of support.

The Samoa Observer is reporting several constituencies from the big island of Savai'i have voiced their concerns against the extraordinary move by the H.R.P.P. against Justice Satiu and urging the caretaker P.M. and caretaker govt. to concede defeat after the results of the 9 April election and make way for a new Government.

The high chief from Fagae'e, Leauna'i Uesile spoke on behalf of the constituency and made an impassioned appeal to Tuilaepa, to "step down" saying the voters of the country has already spoken and chosen Fiame Naomi Mata'afa to be Samoa's leader and the nation's first female Prime Minister.

Leauna'i commended and praised Tuilaepa and his Government for their history of empowering women in Samoa.

But he said that Tuilaepa should no longer delay convening Parliament and must "give Fiame the opportunity to lead."

"We strongly support the chosen leader, Fiame," he said.

"We are gathered here today to relay our support and deliver a very important message.

"Because we could not join the others in Apia, we have decided to have our own parade here."

The high chief further urged the H.R.P.P. to withdraw a complaint lodged against the Chief Justice and to instead "honor and respect the decisions from the courts."