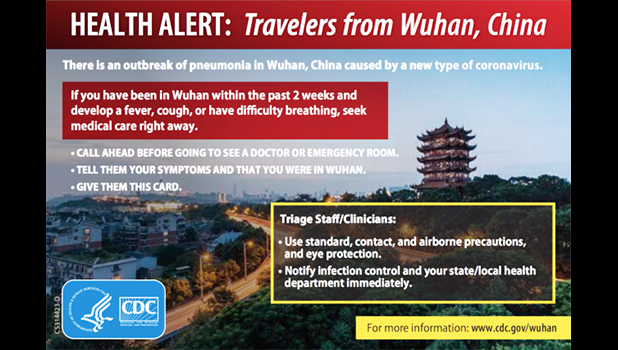 Honolulu, HAWAII — It will be up to travelers to identify themselves if they suspect coronavirus symptoms when they arrive at Honolulu International Airport, federal health officials said Tuesday.

Passengers arriving in Honolulu from the Hubei Province of China will receive a copy of a travel health alert notice as they pass through customs. The notice warns them to watch for respiratory illness symptoms, a spokesperson with the Centers for Disease Control and Prevention told Civil Beat Tuesday.

The death toll for the coronavirus, which is believed to have originated in Wuhan, the capital of the central China province of Hubei, reached 106 on Tuesday. Five cases have been confirmed in the United States.

The agency has “reassessed its entry screening strategy” and will rely on customs agents to distribute the health notice. If travelers identify themselves as having possible symptoms, customs agents will refer them to the CDC quarantine station at Honolulu International Airport.

“It’s not necessarily a screen of everybody for it,” said CDC spokesman Scott Pauley. “If they show up and they have symptoms that fit parameters then they will be referred to the CDC’s quarantine station for evaluation.”

The number of confirmed cases worldwide rose to 4,515 on Tuesday, up from 2,835 on Monday. The five cases confirmed in the U.S. were all among people who had traveled to Wuhan. No person-to-person spread of the virus has been detected in the U.S., according to the CDC, which recommended Monday that people avoid all nonessential travel to China.