Guam could learn from American Samoa island of Tau 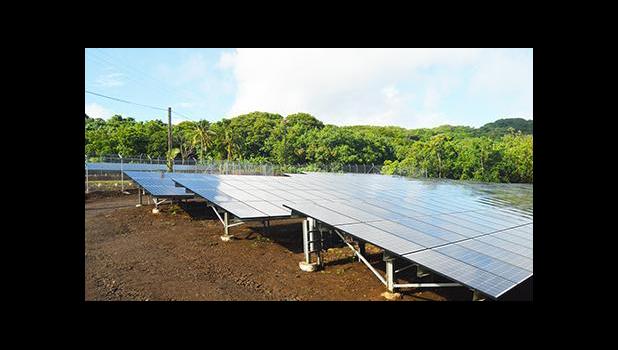 By
the Guam Daily Post
Sometimes big changes come in smaller microgrids, instead of one massive diesel power plant.

Hagåtña, GUAM —  On the island of Ta'u in American Samoa, a revolutionary shift occurred in 2016.

The island dumped its total reliance on a diesel-fueled power plant, shifting to a power generating facility that harnesses energy from the sun and uses powerful batteries for storing solar energy for nighttime use.

It's a major feat for a small island, and it was noticed internationally. National Geographic writes, "In looking toward a more sustainable future, the hundreds of residents of Ta'u have put their faith in a new solar energy project, which some say they would like to see replicated around the world."

Ta'u's solar-powered microgrid was estimated to have cost $8 million, and was funded in part by the U.S. Department of the Interior and the American Samoa Power Authority, National Geographic reported. The solar project was installed by SolarCity, which has been purchased by Tesla, the company that has become an industry leader with its "power wall" solar energy storage, solar panels and solar roof tiles.

Although Ta'u's solar power plant is small – it generates power for about 600 of the island's inhabitants – Guam could pick up some lessons from this little island, as the cost of Guam's electricity has gone up with the rising cost of fossil fuels.

The Guam Power Authority and its board, also called the Consolidated Commission on Utilities, could rethink their massive, low-sulfur diesel power plant project that could cost between $200 million and $300 million. It might not be too late to scrap a massive power plant project in favor of smaller microgrids in different parts of the island.

The massive power plant plan still awaits a decision from the Legislature for a zone change for the proposed power plant site. And rate regulator Public Utilities Commission still hasn't given a final approval on this power plant project.