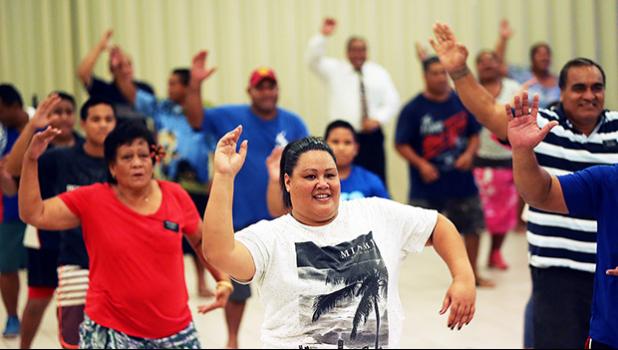 Papeete, TAHITI— Her shortness of breath, the pain in her chest and the numbness in her left arm and leg worried Maruia Teamo enough that she hesitantly tried to prepare better meals for her family.

Her husband hated it. So every time the 39-year-old mother made a healthier meal, she also made him something he'd like. Tempted by his dinner, she always snuck some herself. She wasn't getting better. She felt alone.

Teamo hoped that would change when she signed up for a brand-new free class on healthier living last month. Instead, the class provided the scare of her life. She took a blood pressure test on the first day. Normal systolic blood pressure falls in the range of 100 to 120, and 140 is high. Teamo's systolic BP was an alarming 180.

Given that and her weight, she is at high risk of joining a vast epidemic sweeping the South Pacific, where diabetes is killing or maiming thousands each month.

"I got scared, and when I told my husband he was more scared than I was," she said.

Their fright is real.

Doctors perform an amputation every 12 hours in Fiji, where a third of the population of nearly 300,000 is diabetic. Tonga is home to the world's highest male obesity rate, and an estimated 15,000 Tongans in a population of 106,000 suffer from the diabetes, according to TVNZ.

Teamo's home of Tahiti is part of the chain of islands that comprise the nation of French Polynesia, where 70 percent of the population is overweight and 40 percent are obese. Nearly 1 in 6 who live here suffer from Type 2 diabetes, a largely preventable, noncommunicable disease.

Many are looking at Teamo's class for answers. Five weeks into the 12-week course, she and her family are changing. She has slashed portion sizes, increased her fruit intake and begun to exercise carefully. She loves the natural support group the class created for her. Even her concerned husband, Tunui, was willing to change for her.

"It feels like I'm taking control of my life," she said after a bird flew through doors open to welcome breezes on a muggy morning. It strutted around the room. "Now I cook what I like. Since the first meeting and setting my goal to lose weight, my family is eating what I eat. And my husband comes back from his job on a commercial boat each weekend with fruits from other islands. Every morning, we have smoothies with those fruits."