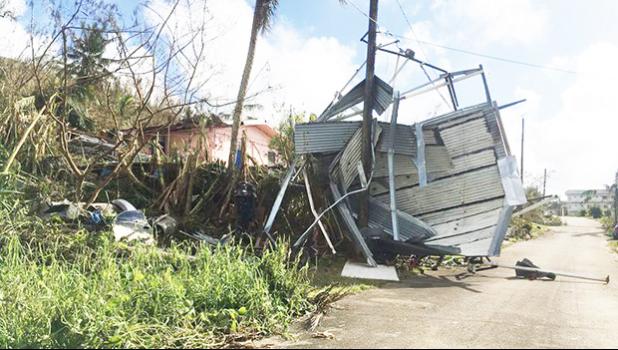 Amata says, "Our prayers are with CNMI"
By
Radio New Zealand

Saipan, CNMI — 133 people have been treated at the only hospital in the Northern Marianas since Super Typhoon Yutu devastated the US commonwealth on Thursday.

The Saipan hospital said most of the cases were lacerations that required surgery.

The category 5 storm passed directly over Tinian, lashing the islands with winds over 350 km/h. It left a trail of destruction across the island and neighbouring Rota and Saipan.

The death toll stands at one. A 44 year-old woman died when the building she was taking shelter in collapsed on top of her during the typhoon.

The injuries and casualties for Rota and Tinian has yet to be reported.

Hundreds of homes have been destroyed, with many reduced to piles of splintered rubble. The power grid has suffered extensive damage, and the airport and sea port are still closed.

"It's a big, big devastation for our island," said Francisco Aguon, a represenative from Tinian in the territory's legilsature. "A lot of the people out here, they're walking in the streets feeling like they cannot get through."

"They don't know what too do because a lot of the houses out here are blown away," he told a news conference.

The Tinian mayor, Joey San Nicolas, said president Donald Trump has declared a state of disaster, and a C-17 plane with food and water arrived on Saturday morning, with another due later in the day.

It's been described as one of the most powerful storms to have hit anywhere in the United States.

More than 800 people are being cared for in shelters across Saipan and Tinian with more expected in the coming days.

Mr Torres said the approval means additional federal assistance will be provided for the Commonwealth as well as disaster assistance.

He said Yutu was the worst storm to hit the Marianas since Typhoon Jean in 1968.

“This extremely powerful typhoon is causing great damage to our friends and neighbors in the Northern Marianas and Guam. Our prayers are with CNMI as they will face a major recovery effort and our thoughts are with those in Guam still experiencing the effects of this huge storm. Many people will be displaced, and many will lose possessions, homes and businesses. We have deep connections with our Pacific neighbors, especially the other U.S. Territories, and there are certainly Samoans living in the path of this storm. I trust that FEMA will strongly support them in this time of need and the recovery to follow, and may God bless all the efforts to stay safe and help others.” (Source: Media release from the Congresswoman's D.C. office)