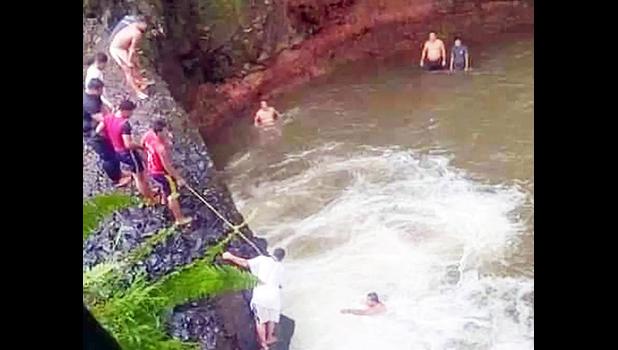 Apia, SAMOA — Tragedy struck a family’s Christmas holiday tafaoga when a 20-year-old boy named Perez from Malie, did not emerge from making the jump into the popular plunge pool at Togitogiga Falls.

The Togitogiga multi-layered Waterfalls in O Le Pupu Pue National Park at Saleilua village is a popular stop for family day-outs, and the same jump has been made by locals and visitors alike, many times before.

A witness who was at the falls at the time of the accident said it happened between 3:30- 4:30pm.

Kiei Vaiti Tala, 20, of Saleilua was swimming with his younger brother when the incident happened. He told Samoa Global News that the current was strong at the time.

Kiei said they and other youth of the village had arrived a lot earlier, and they all made the jump. However, when they could see that the river flow had gotten stronger, they stopped.

He said a lady looking after the falls did come and warn visitors against jumping, but he does not know if the family from Malie were there at the time, or heard the warnings.

Police Commissioner Su’a Fuiavailiili Egon Keil confirmed both Police and Fire responded after family and bystanders could not locate the boy below the water.

Commissioner Keil says a professional diver usually called upon for this type of incident, had later recovered the boy’s body after several attempts.