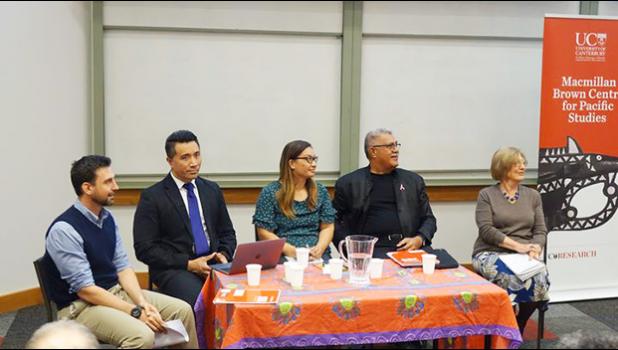 Christchurch, NEW ZEALAND — The message that Pacific people affected by climate change would rather stay in their homes than become refugees in New Zealand was reiterated by a panel at Canterbury University on Thursday.

The panel in Christchurch discussed New Zealand's response to Pacific climate change, and how the country would potentially accommodate climate change refugees.

"New Zealand recognises that Pacific countries are uniquely vulnerable and that we are neighbours in our Pacific region. So our response to Pacific climate change is quite specific to the Pacific and is underpinned to the express desire of Pacific peoples to remain in their countries. And what that means is that we have to focus primarily on mitigating the effects of climate change in Pacific nations and support their ongoing viability."

She said that given the connection to their homes, mitigating the effects of climate change should be prioritised, but she said if relocation is necessary, tangata whenua should be at the centre of decisions made about it.

"When it comes to welcoming any people here, tangata whenua should not only be at the decision making tables of those plans, but can also take care, and welcome and resettle people better."

"But i think it makes it a bit easier for us to understand our role when we remember that for people in communities experiencing the threat of displacement it's only one pathway and there are a lot of other things they're thinking about first."

Dr Iati Iati from Otago University said New Zealanders would need to look at the assumptions and issues around Pacific climate change before they decide whether taking refugees is a good idea.

Dr Iati said that Pacific communities have indicated that they fear the loss of their identity if they have to leave their homes and come to New Zealand.

"Connections to their lands, spiritually, culturally. If you were to give them the option of coming to New Zealand, or their countries, the majority would want to remain in their countries."

Dr Iati said it would be important to consider what everyday people in the Pacific feel the response to climate change should be.

He said it would also be important to think about alternatives to climate change migration to New Zealand - such as Pacific Islanders moving to other Pacific countries.

And this is something Lopeti Senituli, who is from Tonga, believes could be a solution.

He proposed the idea of a federated states framework of Tuvalu, Kiribati and Fiji - called Vituki to the panel. He said it would be similar to the arrangement New Zealand has with Niue, Cook Islands and Tokelau.

"It's dealing with issues in the Pacific way, amongst themselves. This is part of the proposal of the Federated States of Vituki - it's coming from within and there is already a foundation there, so eventually you can expand."

He said that Pacific people will always have a strong cultural and spiritual connection to their land.

"People say 'we want to be buried where our afterbirth was buried, under the same tree or near the same tree'. Of course we might want to go and make a living somewhere else, but in the end - this is our home."