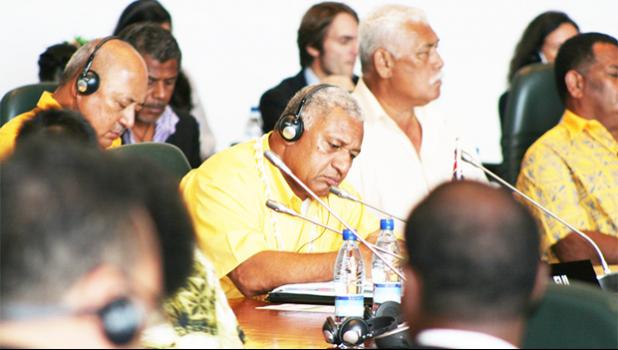 Auckland, NEW ZEALAND — Australia's new security pact with the US and the UK has touched a nerve at the core of Pacific regionalism.

The AUKUS alliance, announced by leaders of the three countries this week, finds them seeking strategic advantage in the Indo-Pacific region with a focus on developing nuclear-powered submarines for the Australian Navy.

Announcing the pact via video link with Australia's Prime Minister Scott Morrison and his British counterpart Boris Johnson, US president Joe Biden said it was about enhancing their collective ability to take on the threats of the 21st century.

"Today we're taking another historic step, to deepen and formalise co-operation amongst all three of our nations, because we all recognise the imperative of ensuring peace and stability in the Indo-Pacific over the long term.

"We need to be able to address both the current strategic environment in the region, and how it may evolve."

Describing this threat as rapidly evolving, Biden said AUKUS was launching consultations on Australia's acquisition of conventionally armed submarines powered by nuclear reactors. The president emphasised that the subs would not be nuclear-armed.

But the general secretary of the Pacific Conference of Churches, James Bhagwan, said the move towards nuclear submarines was a serious concern for a region still dealing with the fallout from nuclear weapons tests.

"Three weeks ago, the current chair of Pacific Islands Forum, the prime minister of Fiji (Frank Bainimarama) reiterated that we want a Blue Pacific that is nuclear free. It's at the heart of Pacific regionalism," he said.

"From the Sixties, from when the very first tests started in our region, this is something that government, civil society, churches have all been very adamant against, to keep our Pacific nuclear-free. We are still dealing with the fallout from nuclear testing."

However, Morrison said it was time to take the partnership between the three nations to a "new level", noting that "our world is becoming more complex, especially here in our region, the Indo-Pacific", a sign of the alliance's growing angst over China.

But the move towards nuclear submarines confronts the spirit of a nuclear free zone that Pacific regional countries signed up to decades ago.

Furthermore, the pact comes as the Pacific Islands Forum continues to protest about Japan's plans to dump treated nuclear waste water into the ocean from the Fukushima power plant, that was damaged in an earthquake and tsunami ten years ago.

The Federated States of Micronesia, a country with close ties to the US, was diplomatic in conveying how the pact caught it by surprise.

A spokesperson for the FSM government said it had "trust, faith and confidence" in the US and Australia in their promotion, and protection, of a Free & Open Indo-Pacific

"It can safely be assumed that the United States and Australia are making security decisions with the best interests of the Pacific in mind, because our vitality is their vitality. That said, this news is a surprise.

"Micronesia is confident this decision makes our country safer, but Micronesia also looks forward to learning more about how precisely that is the case."

Meanwhile, France has reacted with disappointment over the pact, as it means Australia has dumped an earlier lucrative deal in which it was to have purchased French diesel-electric subs.

Rather than loss of business, Pacific Islands are more concerned about existential loss, having first hand experience of nuclear testing by French, American and British.

"We are the fish basket of the world. So if one submarine comes in and something goes wrong and the nuclear waste from that submarine gets into our ocean, that's too much already."

Rev Bhagwan questioned how the pact stacks up with Scott Morrison's claims that Australia considers Pacific Islands countries as vuvale, or family.

"This is our Pacific way. Sometimes we don't agree, but we always act in the best interests, we always come and support one another," he said.

"This is not Australia acting in the best interests of the rest of its Pacific Vuvale."

China has described the pact as being detrimental to regional peace and stability.

Relations between Beijing and Canberra are at an all-time low, and a spokesman for the Chinese government urged Australia to think carefully whether to treat China as a partner or a threat.

New Zealand's Prime Minister Jacinda Ardern said the prohibition of nuclear powered vessels in its waters remains unchanged, adding that the pact "in no way changes our security and intelligence ties with these three countries".

She said New Zealand was first and foremost a nation of the Pacific, which viewed foreign policy developments through the lens of what is in the best interest of the region.