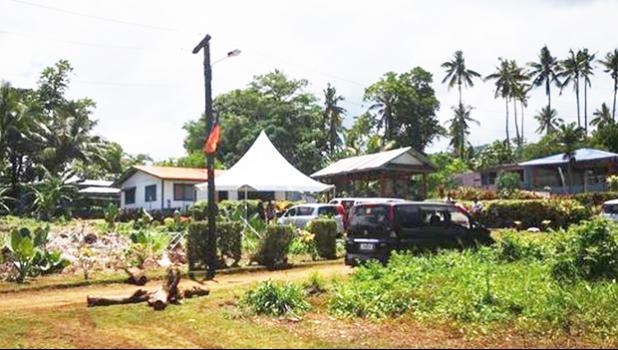 By
Alex Perrottet and Logan Church of RNZ

Apia, SAMOA — A controversial 'healer' in Samoa - who attacked a Checkpoint crew who tried to talk to him this week - has been shut down by authorities as the measles crisis escalates.

Forty-four people are now dead, with the health authorities urging the country's parents to immunize their children.

Despite a country-wide mass vaccination campaign, where more than a quarter of the population has had the needle, the most vulnerable group of children are still being kept away from the vaccines.

Instead, many have been turning to traditional healers, including Fritz Alai'asa, who is running a clinic in Vaivase-Tai, in Apia.

He claims his 'Kangen water', which is alkaline water processed through an expensive machine, is healing people of measles.

But the government press coordinator Nanai Lave Tuiletufuga said Alai'asa was shut down and an investigation had been launched.

"It was shut down for health violations under the Public Health Act," he said, referring to strict rules under the state of emergency currently in place, which forbid large gatherings of young people.

"There is an ongoing investigation including the Ministry of Health, the Attorney General and the police."

But on Friday Alai'asa was still receiving visitors, as carloads of people with young children arrived at his property.

When RNZ reporters arrived, he ordered them off his property, called security guards, and became violent, striking the vehicle with his fist and reaching inside the car.

Commissioner of Police Egon Keil said the matter will be discussed at a police briefing on Saturday.

More than 3000 people have now been infected with the highly contagious disease and doctors say the death toll is likely to rise.

One seller of Kangen Water told Checkpoint he had had almost 2000 customers in two weeks.

Early on Friday morning in Apia, almost 100 vaccinators, police officers, and other medical staff gathered, before piling into vans and heading out to the furthest reaches of the island.

One team went about an hour's drive away to the seaside village of Manono-uta, where one baby died after contracting measles last week.

One of the village residents, Fa'i Fruean, has two daughters who have contracted measles. He said he took them to hospital last Saturday.

He is just one of many parents who took their children to get vaccinated at the hospital and at the mobile clinics.

More than 50,000 people have been vaccinated so far.

But most of those are not in the most at-risk group of people - children aged under four.

Kangen Water is one of the most common home remedies.

The water is being sold for 1 tala a litre, about 60 New Zealand cents.

Edward Williams Junior is one Kangen Water seller. He spoke to Checkpoint and showed the water filtration system, which he had bought online from Australia.

He said he suggests people also get vaccinated for measles and acknowledged there is no proof backing up the claim his water cured measles.

Nevertheless, sales are going through the roof, with nearly 2000 customers at his shop alone in the past fortnight.

At Leulumoega district hospital, New Zealand doctor Scott Wilson is in charge of looking after those who have contracted measles.

He said some of the children he has seen were deteriorating before his eyes.

The death toll now stands at 42, and it is clear that this crisis is far from over.