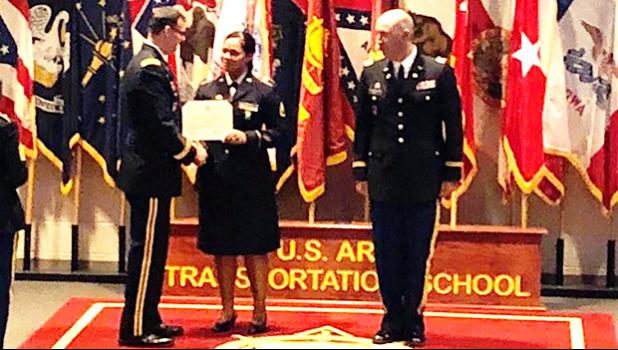 Camp Humphreys, SOUTH KOREA — SSG Ioana-Star Wells is an 88N, Transportation Management Coordinator, who hails from the village of Leone and is the daughter of Tuaula and Florina Scanlan. She is currently assigned as the Movements Supervisor under G4 Mobility Division, Eighth Army, “Pacific Victors” in Camp Humphreys, South Korea.

US Army Transportation Corps holds an annual event, which honors selected individuals who have made distinguished contributions to the Transportation Corps, and who, by virtue of prestige, status and experience, assist in fostering regimental pride and esprit de corps.

SSG Wells was selected as the 2017 Transporter of the Year for the Active Component Non-Commissioned Officer category for her exceptional contribution and dedication to the Transportation Corps during her tenure while assigned to the 11th Transportation Battalion under 7th Transportation Brigade Expeditionary (TBX) — a title which identifies her as the best transporter in the US Army, an achievement well deserved.

SSG Wells was vital to the success of deployment and redeployment operations in the organization. Serving as the Unit Movement Officer (UMO) under the leadership of battalion commander, LTC David P. Key, she was the lynch pin which allowed subordinate units to embark on assigned missions. She deployed the Army’s only Causeway Unit in support of Big LOTS West via rail; coordinated for the 119th ICTC deployment to Puerto Rico in support of humanitarian relief of Hurricane Maria aboard Aircrafts, C17s; deployed Task Force 11 on USNS Brittin in support of the SOCOM, “Beyond the Horizon” operation to El Salvador; deployed and redeployed Task Force 7 in support of JLOTS “Cascadia Rising” in Tacoma Washington - and this is just a few of her achievements.

With so much gratitude and appreciation for the honor and recognition bestowed upon her, SSG Wells shared her thoughts and encouragement for all who have ambition in joining the military and becoming a greater person in life.

“I am a product of the hard work I witnessed growing up from my mother Florina, Aunty Ioana Uli and Uncles Lemanu’a Uli and Ta’afano Tavale as well as all my relatives. They were goal-setting individuals who set out to achieve them. If ever encountering brick walls, they would figure a way to climb over it rather than turning around. I have integrated the same mindset as a soldier,” she said.

“Winning the 2017 Transporter of the Year was a result of the leadership I was blessed to serve under, the dedicated and devoted soldiers and many failed attempts to do my job which allowed me to continue to progress mentally and professionally.”