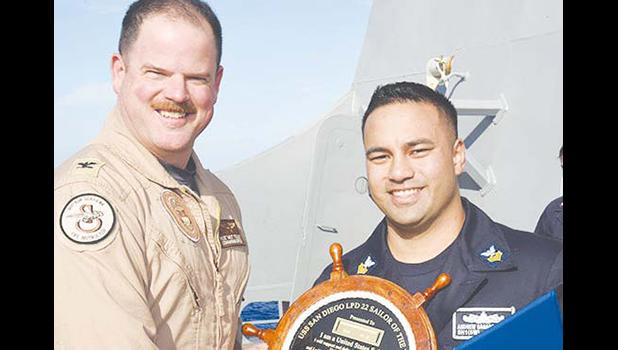 A son of American Samoa from the village of Ili’ili, Sagapolutele is a graduate of Fa’asao Marist High School, according to the US Navy, adding that his father and mother, Abraham and Tiana Sagapolutele reside in Ili’ili.

Abraham told Samoa News last Friday that his son entered the US Navy right after graduation in 2005 and before high school, attended Lupelele Elementary School in Ili’ili.

Abraham, who is a US Coast Guard veteran, said he was “very surprised” to recently learn from his sister, who lives in Hawai’i, that his son has received this award. Even Abraham’s other son, Anthony, who resides in Hilo, Hawai’i and currently with the Hawai’i Army National Guard, didn’t know about the award until just recently.

“I’m really proud of Andrew getting this award,” Abraham said during a brief interview. “He is very smart. He doesn’t talk too much, very quite person. Always focused on his school work and he made it.”

The last time Abraham spoke with his son was in May this year, while in Honolulu.

Asked for reaction to his brother’s award, Anthony said, “I’m proud of him and his hard work for all these years being in the Navy and is a loving supportive husband to his wife and their three children.”

“Andrew has been a great role model to me and I hope I can follow in his foot steps in the US Armed Forces to pursue great achievements as he has done, and giving glory to God and my parents for raising us well,” said Anthony via email from Hilo last Friday afternoon.

According to the US Navy, the USS San Diego is currently deployed to the U.S. 6th Fleet Area of Operations/Mediterranean Sea, says the US Navy in public information.