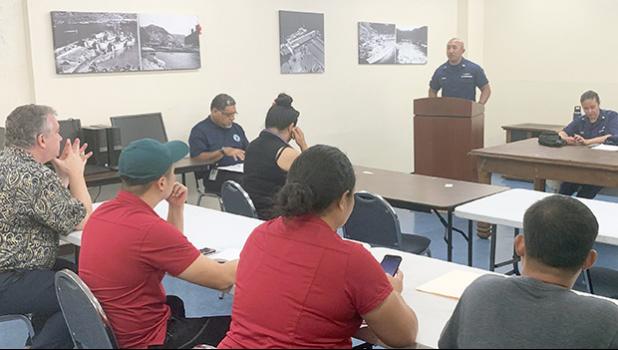 Pago Pago, AMERICAN SAMOA — US Coast Guard Lt. Creighton C. Chong is the new supervisor for the Coast Guard Marine Safety Detachment American Samoa unit. He reported to American Samoa on Aug. 25th, and underwent local quarantine requirement before being released for duty. Thereafter Chong attended a “meet and greet” with local officials and others on Sept. 16th at the Port Administration conference room at the main dock where he was officially introduced to the community.

According to his bio, Chong is the representative of the Coast Guard Sector Commander, Captain Arex Avanni, in Honolulu. In this role, he is responsible for the oversight and facilitation of maritime and port operations related to safety, security and environmental protection in American Samoa.

Originally from the neighborhood of Kalihi in Honolulu, but living most of his life in Virginia, Lt. Chong entered the Coast Guard in 2009 through a diversity program while completing his Bachelor of Science in Civil Engineering Technology from Old Dominion University in Norfolk, Virginia in 2011. That same year, he received his first operational assignment to the USCGC CONFIDENCE (WMEC-619), home ported in Port Canaveral, Florida, where he served as a Deck Officer and Law Enforcement Boarding Officer.

In 2014, he was assigned to Sector Sault Sainte Marie, Michigan where he served as the Waterways Management Division Chief and a Command Duty Officer, responsible for port operations and search and rescue cases in Northern Michigan, Wisconsin and Minnesota.

Prior to his American Samoa assignment, Chong was assigned to Sector Jacksonville, Florida where he served as the Port State Control Branch Chief, responsible for the targeting and examination of all foreign commercial vessels in the Jacksonville area. He currently holds a 100 Gross Ton Master's endorsement, U.S. Merchant Mariner Credential.