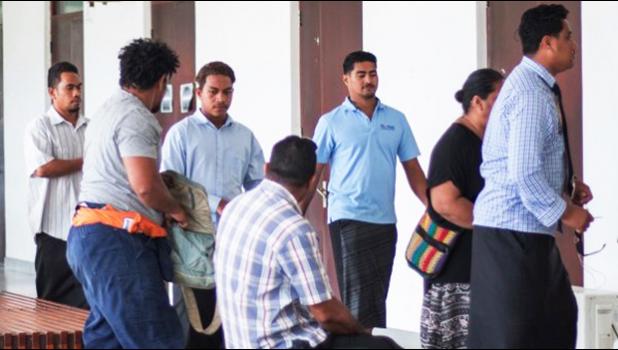 Apia, SAMOA — Nine of eleven men from Luatuanu’u accused over blocking the road, in an incident where the Police were attacked earlier this year, have been jailed by the District Court.

The sentencing was handed down by District Court Judge Fepulea’i Ameperosa Roma yesterday.

The men faced charges of disorderly conduct, obstruction of a public road, being armed with dangerous weapons, throwing stones, threatening words and rioting.

Lawyer Vaisala Afoa of the Attorney General’s Office was the prosecutor.

According to the Police summary of facts, the incident occurred on March 19 this year at Luatuanuu.

The men blocked the government road after the Anoamaa District Rugby Tournament on March 17, 2018, which resulted in a dispute between the young members of Luatuanuu and Falefa.

“The accused were all involved together with other men of their village where they blocked the government road and obstruction of traffic,” the Court was told.

“They were also involved in the incidents where they threw rocks at the police cars as well as members of the public who were using this road to travel to Apia on the morning of the incident.

“This same day the accused, Lilo Asiasi Faaitiiti, uttered threatening words to the Police officers who came to calm the situation down.

The matter was first called on 24 March where the accused men pleaded guilty to the charges against them.

A different incident led to the charges against Joe Junior Peseta, 28, of Lutuanuu, Sonny Motu Elia, 25, and Jason Kioa, 24, who faced charges of disorderly conduct and rioting.

“The victim of this matter is a male of the village of Ta’elefaga, Fagaloa,” the Court heard.

“On April 19, 2018 around one o’clock in the morning, the victim was travelling with his wife and a family member heading to Motootua Hospital.

“When they arrived at Luatuanuu they found packs of sands and a toilet bowl blocking the main road. The victim slowed down his vehicle however, someone started throwing stones towards their vehicle and by this time, the victim started speeding so that he could get away from the Luatuanuu men.

“The victim laid a complaint to the Police and they conducted their investigation and found that the three accused were the ones who were involved in this incident.”