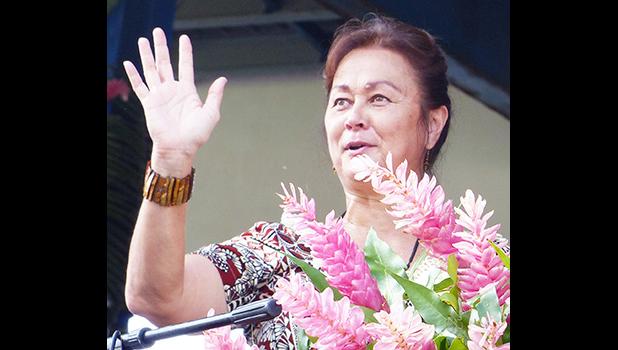 Pago Pago, AMERICAN SAMOA — “As employees, you are giving up your lives to serve our people — that is your sacrifice,” declared Lydia Faleafine-Nomura, the US Interior Department’s local field representative, in her keynote address at last Friday’s Workforce Day, under the theme: “Sacrifice for A Better Tomorrow” at Veterans Memorial Stadium.

Faleafine-Nomura, who has served for 38 years in both the local and federal governments, explained that she conducted research into the theme, in both Samoan and English.

She shared with the crowd, made up of mostly ASG employees that “when most of us think of ‘Sacrifice’ — we think of the sacrifice of our Lord Jesus Christ and the sacrifice of our sons and daughters in the military,” adding that “Sacrifice is the gift that our Lord has given us — the precious ‘Gift of Life’.”

To all employees, the workforce in American Samoa, with their many years of service in both the government and private sector, she said they have sacrificed their lives for the betterment of American Samoa and its future generations —  that “is your sacrifice.”

“More importantly, you are giving up your ‘time’.

Faleafine-Nomura, who delivered her address in both Samoan and English, noted that everyone knows “our time on earth is limited” and “time is so precious”.

“Time is life and we must make the most of it. We want our lives to mean something and that our sacrifices as employees were not in vain,” she continued.

“Use your time wisely. Make sure your time as an employee — whether in government or business — is not wasted, and that at the end of your career — whatever your occupation may be — you can say, ‘I did something good’,” she stated.

She called on all employees to work hard with “love” and respect for others at all times.

The celebration, which lasted for about two hours and was broadcast live by the government owned KVZK-TV, began with Gov. Lolo Matalasi Moliga offering special remarks.

He emphasized that Workforce Day celebrates and recognizes all workers in the territory, including those whose duties include caring for the villages, and families, as well as farmers, fishermen and those who are self employed.

Lolo said workers in all sectors of the territory contribute to the betterment of the lives of the people of American Samoa. There is no question that “our service” to the people is not perfect, he pointed out. He encouraged all workers to strive to do the best things for American Samoa and its people.

Senate President Gaoteote Tofau Palaie, in his closing remarks, said that Friday — Workforce Day — is a special day, “as we all come together, to celebrate and honor all the hard working men and women” in the territory.

He recalled for the audience a statement often spoken by many that “there are two kinds of people... the ones that do the work and the ones that take the credit.”

To those workers who do all the work, “thank you”, he said.

As part of the usual celebration, the names of those who passed away in the past 12 months — since last September — were read publicly.

For ASG, more than 20 employees — including three cabinet members passed.

For the private sector, two businessmen, who had contributed a lot to public service, were mentioned during the program.

A moment of silence was observed at the stadium to remember these public servants — these workers — followed by a 21-gun salute by the DPS police service, concluding with Taps.

The celebration ended with lunch served while entertainment was provided by the Vaitogi CCCAS youth group.

For ASG workers who get paid with a paper paycheck — payroll checks were distributed after the celebration.

ASG’s payday was yesterday, Monday, Labor Day, a federal holiday, and the reason the payroll was released early. For workers getting their pay by direct deposit, it was in their bank accounts over the weekend.

Samoa News noticed early Friday morning the long lines at the ATMs at Bank of Hawaii and ANZ bank — before 5a.m.