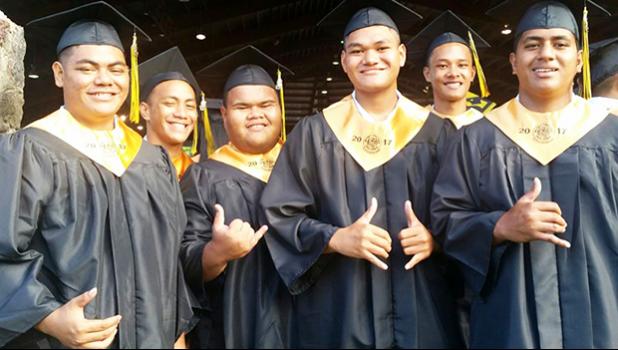 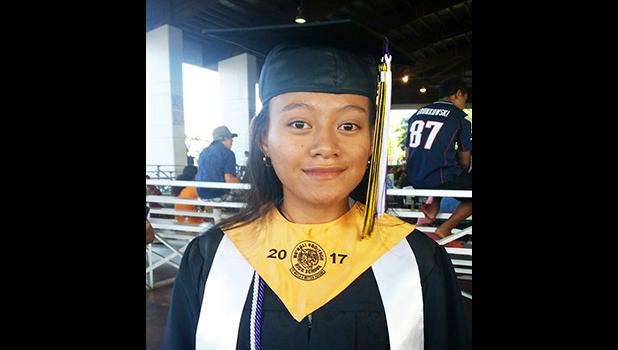 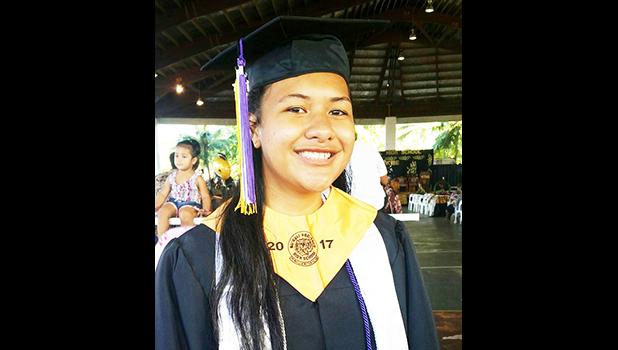 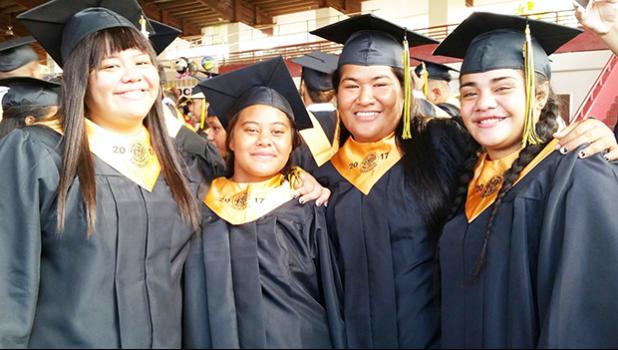 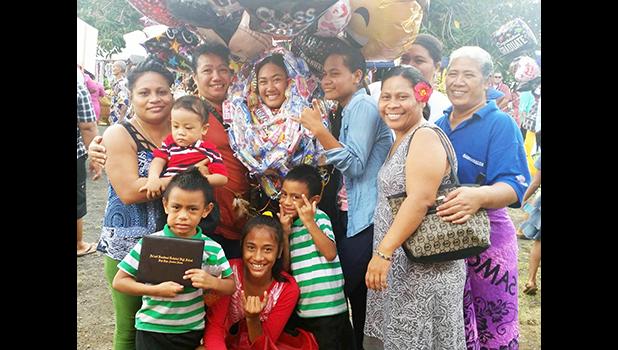 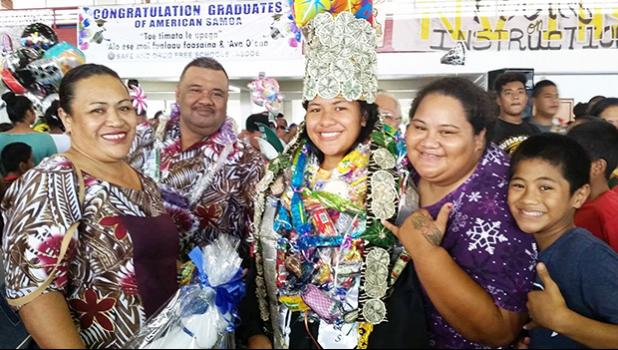 “Whatever you will become, be a good one”
By
Blue Chen-Fruean
blue@samoanews.com

The gymnasium at Kanana Fou was filled last Friday morning with family members, friends, and supporters of the 74 Wildcats who came together one last time to say goodbye not only to each other, but to the high school chapter of their life story.

This year’s coverage of the 2017 high school graduation season — for Valedictorian and Salutatorian — is brought to you by Paramount Builders, a local company that prides itself in promoting education and investing in the territory’s children and students.

The ceremony was led by school principal Tupa’i Roderick Atafua, and recognition of the Top Two graduates - both females - was made by vice principal Dr. Julie Ekeroma Fa’alogo.

This year’s highest honor was awarded to Christine Tominiko of Fagaima.

The Class of 2017 valedictorian, who is the daughter of Peato and Iuliana Tominiko, told Samoa News that she intends to major in agriculture at the American Samoa Community College (ASCC) when the fall semester begins later this year.

During her four years at Nuuuli Vocational Technical High School (NVTHS), Tominiko not only excelled academically, she was also active around campus, serving as secretary for not only the National Honor Society, but also the student council.

Outside of the classroom, Tominiko is a member of the Tafuna Methodist Church. She said she really isn’t sure what she wants to be in the future, although it will have some kind of relation to the field of agriculture.

When asked for some words of advice for her fellow graduates, the soft spoken teen pointed to the backdrop on the stage and said, “It’s all in this year’s graduation theme: ‘Whatever you will become, be a good one’.”

Tominiko will be attending ASCC on a two-year scholarship, as announced by Senator Faiivae Alex Godinet, a member of the American Samoa Government’s Scholarship Board.

Tago started her educational journey at Manumalo Academy and has, over the years, developed a strong interest in marine science, which is her intended college major.

Although she was accepted to Saint Martin’s University in Washington and awarded a $60,000 Dean’s Scholarship Award from the school, Tago told Samoa News that she has opted to stay home and tackle her first college classes at the American Samoa Community College (ASCC).

In addition to excellent grades, Tago left the Home of the Wildcats with many things to be proud of. She was crowned Miss NVTHS, served as student body treasurer, and also president of the National Honor Society.

When asked if she had any last words for her fellow graduates, Tago said, “Believe it. Achieve it. Aim high.”

Other senior awards - besides the top two slots - were presented to the following:

“‘Aua le malolo nofonofo.” This was the advice given to the Class of 2017 of Nuuuli Vocational Technical High School (NVTHS) by Lt. Governor Lemanu Peleti Sialega Mauga when he delivered his special remarks during the Wildcats’ graduation ceremony held last Friday morning at the Kanana Fou gymnasium.

Lemanu was filling in for Governor Lolo Matalasi Moliga, who was attending the 25th Police Academy graduation at the Governor H. Rex Lee Auditorium in Utulei.

Bluesky Communications is a proud sponsor of this year’s graduation season and would like to congratulate all graduates and best wishes in your future endeavors.

NVTHS was the last public school to host its commencement exercise for the 2016-2017 school year.

The ceremony was brief, but beautiful. Even the weather cooperated. The graduates looked spiffy in black and gold and everything looked uniform, down to their matching white flip flops.

The Kanana Fou gymnasium was packed with parents, family members and friends of the 74 graduates who were accepted and confirmed by Director of Education, Dr. Ruth Matagi-Tofiga.

In his address to the graduates, Lemanu said, “Don’t let anyone dictate what you can do,” because “the fate of your life is solely in your hands.”

He said the graduates - for the past twelve years - have been well prepared by their parents, teachers, spiritual parents, and everyone in their support system; and now it’s time for them to enter the real world and work hard to fend for themselves.

Lemanu said young people are used to having people do things for them (i.e., buying and ironing clothes, waking them up in the morning, etc.)

“Now it’s time for you to do it yourself,” he told the graduates. The Lt. Governor said it is time for them to start waking up to an alarm clock, and finding work so they can buy their own clothes.

He advised the graduates not to depend on their parents too much but instead, learn what’s it’s like to do things for themselves.

“You have realized your potential and a new beginning awaits you,” Lemanu said. “Remember that successes start with failure.”

He used as an example, a runner who is out of air and struggling to breathe. “You need to breathe in, breathe out, and try to walk it off. Take a brief rest if needed, but don’t sit for too long. Keep moving forward.”

Following Lemanu’s comments, Senator Faiivae Alex Godinet, on behalf of the American Samoa Government’s Scholarship Board, announced that Christine Tominiko and Samantha Amosa have been selected as recipients for two-year ASG scholarships to attend ASCC in the fall.

One of the highlights of this year’s graduation ceremony was the announcement made by school principal Tupa’i Roderick Atafua that 25 out of the 74 graduates who sat the NOCTI test this year passed.

The number is an improvement, considering that only 16 out of the 75 graduates last year passed the test.

The NOCTI (National Occupational Competency Testing Institute) delivers a battery of assessments or standardized tests for students studying career and technical programs in high schools and technical colleges in the United States, giving them the chance to earn certification in a technical area.

Tupa’i told Samoa News that this is only the second year the test has been administered by NVTHS and “every graduating senior” at the school must take the two-part test (written and hands-on).

According to Tupa’i, students who pass the NOCTI receive certificates that serve as a means for them to secure jobs in the their specific area of study.

The best thing of all: the certificates are nationally recognized.

Tupa’i thanked the parents, NVTHS staff and everyone who made this year’s graduation a success.

Enlisting in the United States Marine Corps is Nathaniel Tiatia.

Graduates who have received acceptance letters to further their education off island are as follows:

(Wentworth Military Academy announced earlier this year that it is closing its doors for good. Samoa News relayed the information to a school official yesterday, and we were told that they didn’t know anything about the announcement. The acceptance letters for the aforementioned students were received and therefore, said the official, “we felt it was appropriate to at least recognize the fact that these seniors were accepted.” Other local schools with graduates that have been accepted to Wentworth have been in contact with other military academies in the US, trying to shuffle paperwork so the students can transfer over).