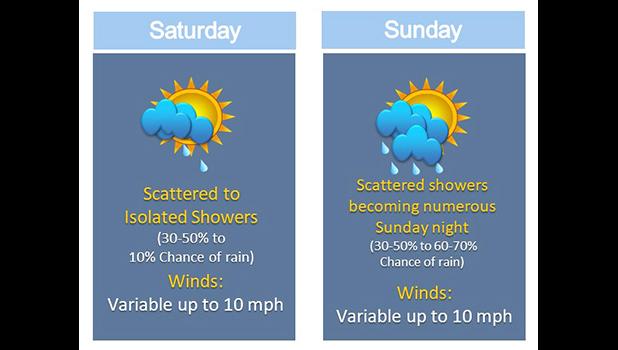 Pago Pago, AMERICAN SAMOA — As a trough remains south and fairly close to the territory, passing showers are expected to continue through the weekend (on and off state). However, a building ridge to the north of the Samoa Island chain is forecast to improve showers by at least Monday.

The trough axis remains just south of the Samoa Island chain through the weekend. Additionally, a ridge to the northeast will continue to move across the area and a high pressure further south will hold this trough south of the area for the majority of the forecast period.

Visible and infrared satellite imageries also show the active weather features remaining south. However, periods of showers will still linger near the territory for the short term forecast.

Pockets of dry air masses will move into the area by at least Monday through midweek keeping minimal showers across the region. An increased chance of showers is expected at the latter part of the long term forecast.