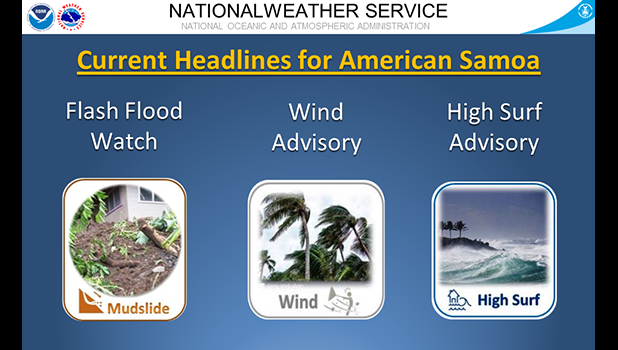 During the 8 a.m briefing yesterday of first-responders and other officials at the Emergency Operations Center, Meteorologist-in-Charge, Ellinor Lutu-McMoore gave the latest update on weather impacting the territory due to an active monsoon trough.

The Weather Office is forecasting winds of 20-35 mph this morning and decrease later to 15-20mph on Tutuila and Aunu’u; while Manu’a winds this morning will be at 30-60mph and dropped later tonight.

Forecasters also continue to monitor a weather system identified as “96P” for possible development into a tropical cyclone.

Also at yesterday morning’s briefing, ASG agencies were informed that the next phase now for the response is “coordinate and deploy damage assessment teams across the territory to start initial recovery efforts.”

Four teams are tasked with the assessments, while Public Works and its partners focus on ASG infrastructure including roads.

With all public schools closed yesterday and today, principals and vice principals are carrying out assessment of their respective schools. Classes at the American Samoa Community College were also suspended yesterday but no word on classes for today.

While majority of private schools were closed yesterday, its unclear about their schedule for today.

For the Port of Pago Pago, Port Administration reports that it’s chartering for two-sails, the Samoa government own MV Fotu-o-Samoa, which is schedule to arrive in the territory on Thursday - tomorrow - for Manu’a.

Additionally, the container vessel, Polynesian, which arrived over the weekend but was unable to dock due to bad weather, was in port and unloading.

At Pago Pago International Airport, it’s re-opened after it closed since Sunday, with flights from Samoa arriving before 12 noon yesterday. Hawaiian Airlines flight that was delayed from

Monday night due to weather conditions here, was scheduled to arrive last night after 9 p.m.

American Samoa Power Authority, American Samoa TeleCommunications Authority and Public Works also gave updates on their response, with ASPA saying that crews continue to work on restoring power to small areas in several villages and ask for the public’s patience.

As of yesterday morning ASPA was also working quickly to restore power from Tula Elementary to Onenoa village on the Eastern side.

DPW have been working to clear fallen trees blocking roads and landslides, and the governor has directed DPW to hire private contractors for major problems, while the department concentrates on responding to public needs.

On the medical and health side, the Tafuna Community Health Centers remain open 24-hours since the weekend for emergency cases only while critical cases are referred to the LBJ Medical Center.

DoH also says that a 61-year old male patient — non-related to the storm — was admitted to the Ta’u Clinic in Manu’a on Feb. 16th and is awaiting medivac to Tutuila.

Some businesses were closed yesterday while the rest remained open including StarKist Samoa. Those who closed operation for the day, issued notices through local radio stations.

The High Wind Warning has been downgraded to a Wind Advisory. Breezy conditions are forecast through the rest of the week. Winds could be strong at times especially during periods of potentially heavy rainfall. However, severe winds that cause widespread damage, like what American Samoa had earlier this week, is no longer expected. We will continue to monitor the tropics for any possible development in the region.

A Flash Flood Watch continues for all islands of American Samoa. Due to the amount of rainfall that we had earlier this week, heavy rainfall will increase the risk of landslides throughout the territory. The High Surf Warning had been downgraded to a High Surf Advisory. However, surf is forecast to reach up to 14 feet along the northern shores of the territory today.

A Gale Warning is still in effect for the coastal waters, but winds are expected to decrease to slightly below gale force later today. Seas of 10 to 12 feet will be higher in areas of heavy rainfall.