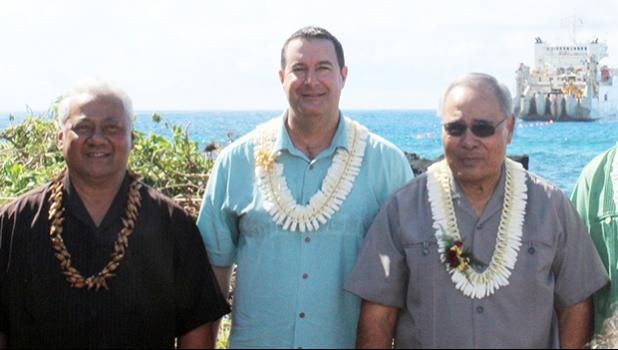 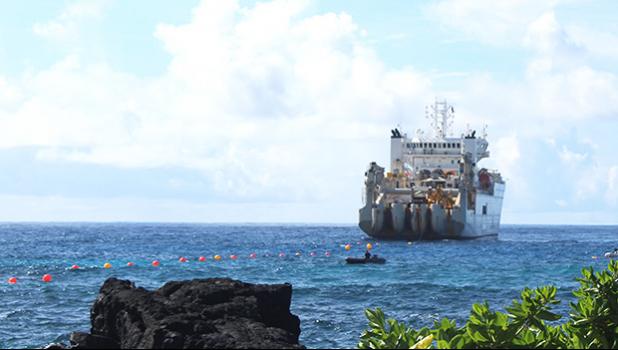 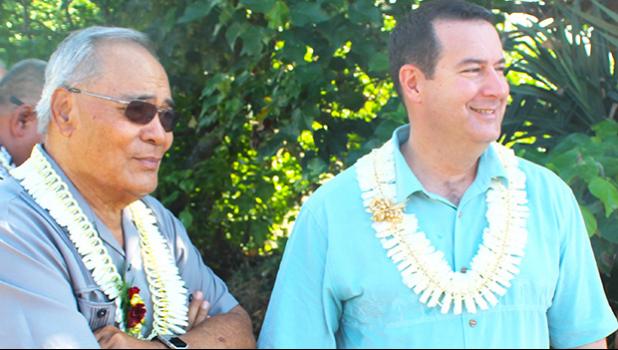 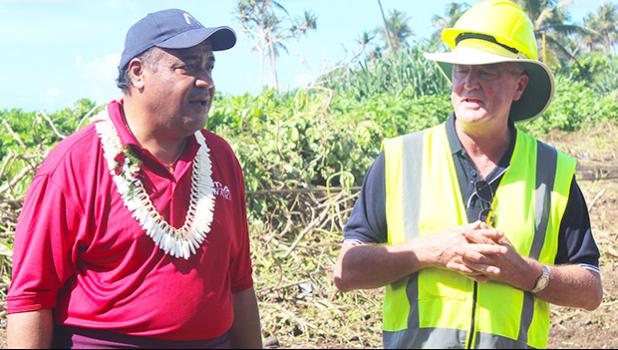 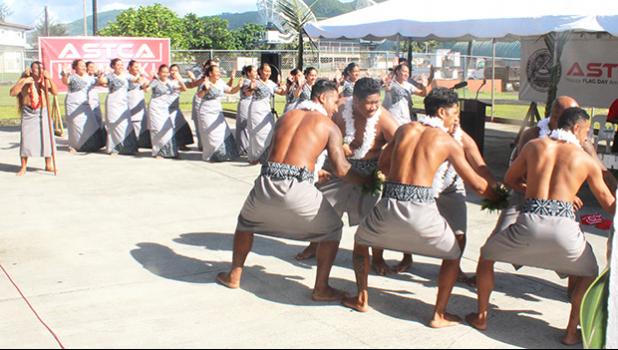 Bringing up to 200 gigabytes of connectivity to the territory
By
Fili Sagapolutele
fili@samoanews.com

The American Samoa branching unit of the Hawaiki undersea cable landed this past Saturday morning at Fogagogo via the vessel Responder anchored off shore laying the cable up to a manhole on the rocky shoreline close to the airport main runway. Simultaneously, the cable landing ceremony was underway at the American Samoa TeleCommunications Authority compound in Tafuna.

ASTCA, which hosted the ceremony, owns the American Samoa branching unit of Hawaiki cable system, which has already laid the cable from Oregon on the US mainland, to Hawai’i, then on to Australia and New Zealand.

Speaking at the ceremony, Hawaiki chief executive officer, Remi Galasso noted that the Responder vessel was laying the cable off Fogagogo, saying that Hawaiki “will definitely be a strategic infrastructure for American Samoa” and congratulated ASTCA for being part of the Hawaiki cable system that will make “American Samoa one of the most connected territories in the whole Pacific region.”

He explained the Hawaiki cable project start in 2012. “It took us six very long years to make it happen. You can easily imagine what this landing in Pago Pago means to my team and to myself,” he told the audience, which included Lt. Gov. Lemanu Palepoi Sialega Mauga and Congresswoman Aumua Amata, and invited guests, such as Bluesky Communications country manager, Raj Deo.

He also said that in a “couple of weeks” the 15,000 kilometers (8,700 miles) cable system “will be entirely laid” connecting Australia, to New Zealand, to Hawai’i and to the mainland USA.

The system will also include four branching units to connect New Caledonia, Fiji, Tonga and American Samoa, which “will be the first to be connected,” he said to applause from the audience.

With Hawaiki bringing up to 200 gigabytes to the territory, “ASTCA will be able to supply high speed internet to the whole population [of the territory] and to the neighboring countries as well,” he said to another round of applause from the gathering, adding that “this would not have been possible without the great vision” of Gov. Lolo Matalasi Moliga.

In his special remarks, the governor said that Saturday morning was “a very special morning” as it “sets the pace and the foundation for the future of American Samoa as far as business, as far as bringing together our people and... our community — communication is of significance and very important.”

Lolo said the cannery continues to face uncertainly with many challenges and is the reason the government is forging forward with telecommunication as a way to attract new businesses.

“We’ve been relying [on] the canneries for our people’s survival. Today is a new step towards a new direction of having this technology be a second base of our economy going forward,” he said.

The governor thanked Galasso “for being good to us, working together with ASTCA and our community to make sure the Hawaiki cable lands in our territory.”

According to the governor, this project’s planned cost is close to $30 million and he thanked the ASG Employees Retirement Fund Board of Trustees for their support in this project. He acknolwedged the presence at the ceremony of board chairman Va’anatiu Iafeta Tofala and Retirement Office executive director, I’aulualo Talia Fa’afetai.

The Retirement board “has been stipulated by statute to find ways to support our economy through our retirement fund. Your support and your effort make today possible,” Lolo informed Va’anatiu.

He also acknowledged and thanked the previous ASTCA board for the previous four years — in which local attorney Roy J.D. Hall Jr., who was the chairman who took the initiative for ASTCA to join Hawaiki.

He said Togiola and leaders at the time saw the importance of fiber optic cable as the future for American Samoa to improve technology that would help both government and the private sector.

At the start of the ceremony, Rev. Reupena Alo gave words of encouragement and wisdom before offering the prayer. He described the project as “an achievement” and “a positive effort” in bringing improved telecommunication to the territory.

He also offered words of caution, saying that anywhere there are good things, it’s also mixed with “not so good things” which are the results of “us forgetting God, who brought this blessing for us.”

Fai’ivae and Pulele’iite both offered brief comments during the ceremony, which lasted less than an hour. Thereafter the VIPs headed to Fogagogo to visit the cable-landing site.

Because of the on-going work at the site as well as very limited land-space to park cars, school buses were used to transport a majority of the VIPs.

At Fogagogo, VIPs witnessed first-hand the work carried out at the site, with the Responder vessel anchored about 1,000 off shore, with two small boats with crew members working.

Hawaiki program manager for American Samoa, Richard Howarth gave the VIPs a briefing on the work already completed and the next step to be taken. He also shared that divers on two small boats accompanying the Responder would actually place the cable on the ocean floor.

“That’s an important part of the process because there’s coral down there and the divers will be ensuring that the cable is placed where the coral isn’t,” he said, adding that the cable will be tested after it’s laid to make sure that during the landing operation, there were no problems or damage to the cable.

“This is a very, very significant moment for you all, for American Samoa to see this cable in place now,” said Howarth before some of the VIPs joined Lolo and House Speaker Savali Talavou Ale at the Hawaiki manhole.

From Fogagogo, the VIPs headed for a tour of the ASTCA/Hawaiki landing station at the Ili’ili Golf Course, before they returned to the ASTCA compound in Tafuna where the blessing of the Hawaiki cable was carried out closing the ceremony.